I promised I would produce a blog post on Max Beckmann's triptychs.  He completed 9 with a 10th unfinished.  The critic Anette Kruszynski suggests that The Carnival (1920), The Night (1918-19) and The Dream (1921) could be assembled to make up an early triptych, with The Night as its centerpiece, but of course it was never displayed that way.  It might have looked something like this (definitely worth looking up the originals of course): 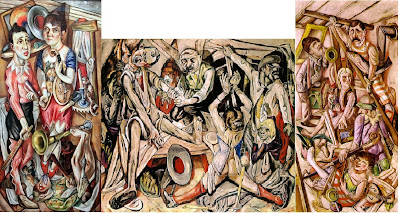 Given that the official triptych images won't display properly unless I push them way down the page, let me provide a bit of additional background on Max Beckmann.  He was denounced by the Nazis in 1937 and left Berlin immediately for Amsterdam.  In that sense, he left before things got completely untenable in that country for those that the Nazis turned on.  I definitely share with him this belief that when things start going bad, you don't stick around to find out how they turn out.  I generally don't find things take much of a turn for the better.

Beckmann is definitely an unusual artist for his times, still working in figurative modes though clearly much of his work isn't conventional.  It draws on myths and dreams, and the larger paintings are usually overstuffed with symbols.  There are no easy answers to what the paintings mean.  While the look is quite different, I find many similarities with Marc Chagall (another artist from roughly the same era, whom I also admire).  I may rate Beckmann slightly higher than Chagall, but quite possibly only because he is a bit more obscure, so you get more "cred" for knowing about Beckmann.  Anyway, much as I like both of them, they still don't quite rate as highly as Picasso or Matisse, who both moved back and forth from figurative and abstract modes in their later periods.

Many of Beckmann's late works are in museums in the U.S., with the greatest single collection in North America at the St. Louis Art Museum.  I was pretty blown away when I finally made it down there to see the museum.  I hadn't been aware of quite how many they owned, or I would have made a special trip sooner.

It appears that all 9 of the triptychs are in public museums (with 7 of the museums located in the U.S.).  I had the opportunity to see 5 at one time at an amazing Beckmann retrospective at MoMA Queens in 2003.  I actually managed to schedule a work trip to NYC around the Beckmann exhibit, and it was totally worth it.  Seeing these huge triptychs in one place and going back and forth and trying to soak in all the details was, frankly, overwhelming.  I only recently learned that there was an earlier exhibit at Guggenheim SoHo in 1996 that focused on Beckmann's later career (see review here).  Seven of the 9 triptychs were on display!  That is a bit disappointing that I missed it, but I was a poor grad student (relocated to Chicago) and I definitely couldn't fly back for such a thing, even had I been aware of it.  My understanding is that the retrospective at MoMA Queens was a much better overall exhibit, even if I missed out on a couple of the triptychs.

It really varies at each institution how frequently their Beckmann triptych is on display.  For years, you could see The Beginning at the Met, but it wasn't on view on my last two trips.  Departure is usually on view at MoMA, especially since their massive expansion.  I think the smaller museums do display their Beckmann's, but these are huge paintings, forcing 3 or 4 other paintings into storage.  At the National Gallery of Art, The Argonauts is typically on display, but Falling Man (1950) rarely is.  I don't recall seeing it there since the late 90s, but I also am not that frequently in D.C.  I think the last time I saw it in person was at the 2003 MoMA Queens exhibit.  Though it isn't a triptych by any means, I'll go ahead and post Falling Man here and then move on to the triptychs themselves.  I think they are pretty incredible but are really beyond my ability to explicate them.  (There is also now a postscript with some Beckmann news if you scroll all the way down.) 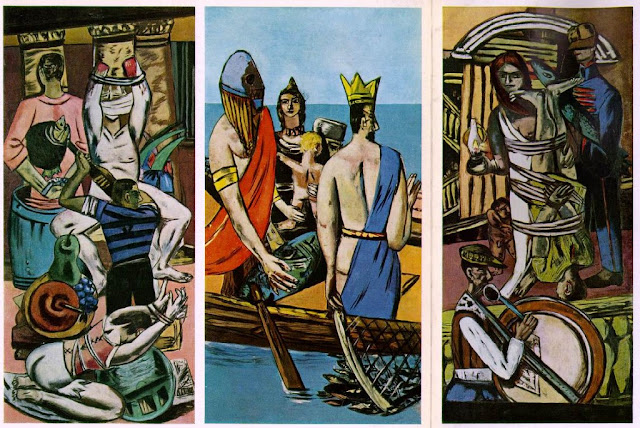 At MoMA (On display at the MoMA Queens exhibit -- obviously.) 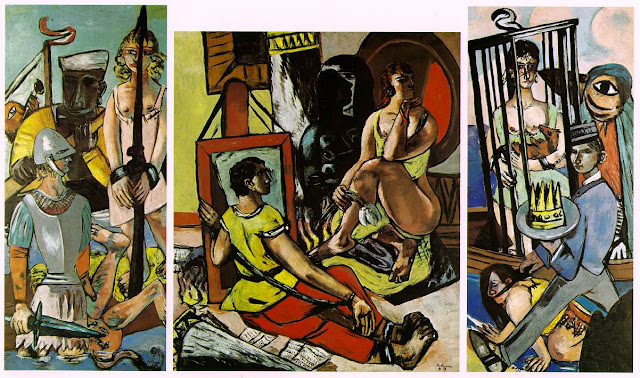 At Bayerische Staatsgemaldesammlungen, Munich.  I have not seen this in person and am somewhat unlikely to at this point.  I guess I will just have to see if it ever turns up on a North American art "tour." 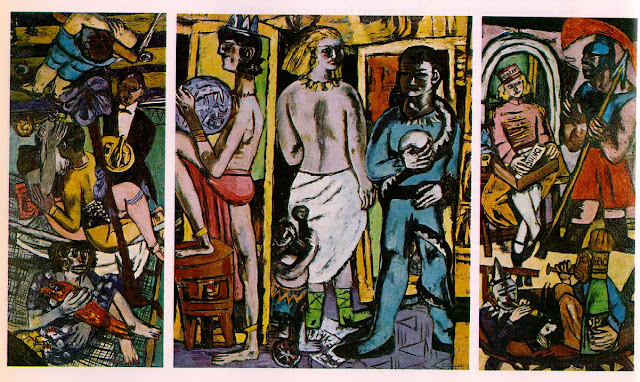 I had been given info that this was in a private collection in St. Louis, Missouri, but it actually went into the St. Louis Art Museum collection in 1983 (a good reminder that you do need to check what is on the internet).  Well, that's certainly good news (that is it in a public collection).  I wonder if it was part of the Guggenheim show from 1996 that I missed.  I have been to the St. Louis Art Museum twice, but I simply can't remember if it was on display.  Most likely it was, but I'll see if I can verify somehow.  In any case, I will check to see if it is on view the next time I visit St. Louis (not that this is likely to be anytime in the next couple of years.) 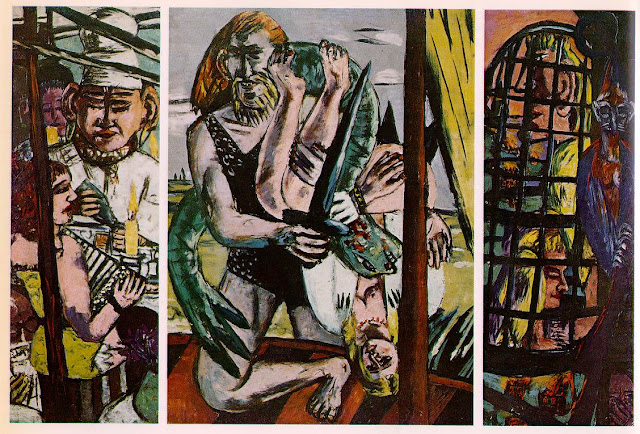 At Museum Folkwang, Essen (On display at the MoMA Queens exhibit.) 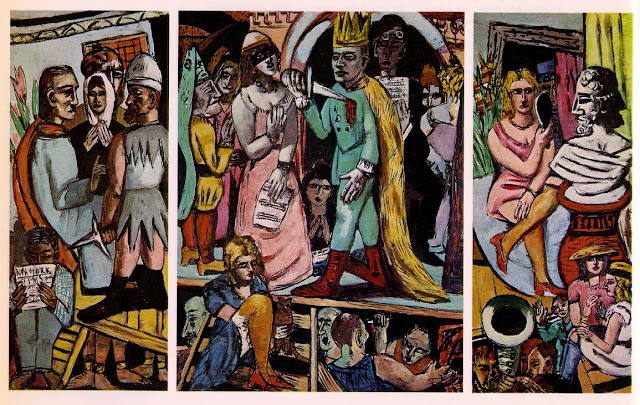 At the Fogg Art Museum, Harvard (On display at the MoMA Queens exhibit.) 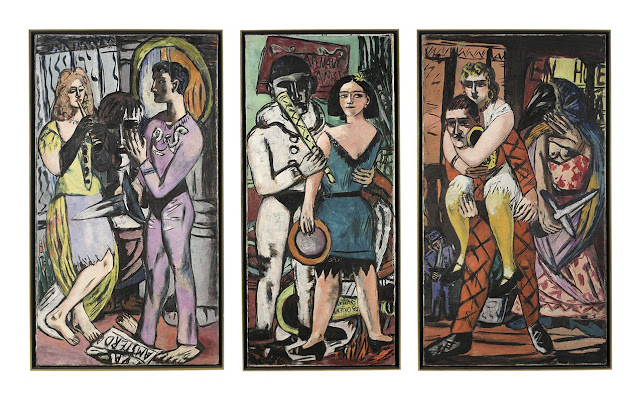 Apparently at the University of Iowa Museum in Iowa City but on extended loan to the Figge Museum in Davenport until Spring 2014. While it is not that likely I will make the trip to Davenport or Iowa City for that matter, I will keep it on my radar.

Still, it does not appear that this was in the big Beckmann show at MoMA Queens, which does somewhat increase the odds that I try to view it in person, though I might wait until it is back in Iowa City -- perhaps I should set up a trip for the kids to discover their (other) Midwestern roots.

At the Minneapolis Institute of Arts.  While I probably saw this on a previous trip to Minneapolis, I am not 100% sure.  Someday I will surely take another trip to the Twin Cities, and I'll check ahead to confirm that this is on view at MIA. 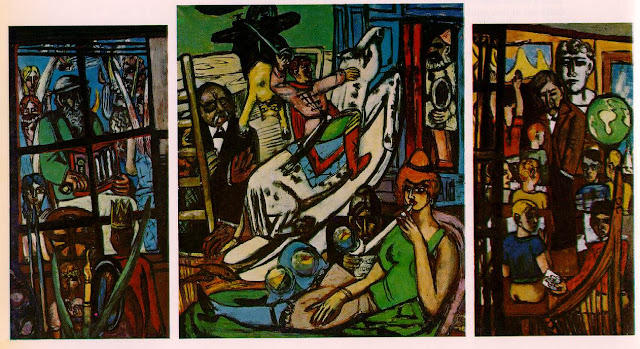 At the Metropolitan Museum of Art, NYC (On display at the MoMA Queens exhibit.) 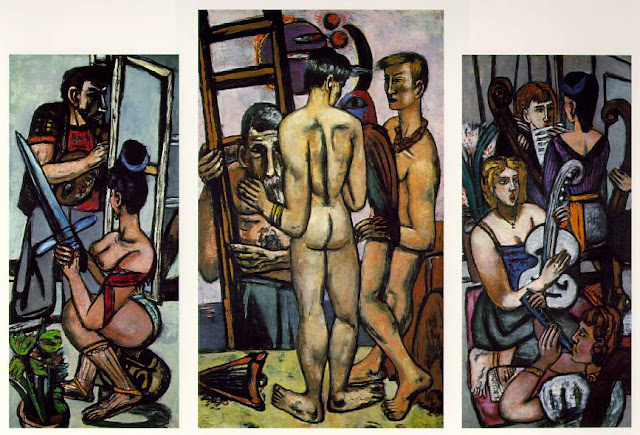 At the National Gallery of Art (On display at the MoMA Queens exhibit.)

Newsflash: this news is actually less than two weeks old (as of today).  The Cleveland Museum of Art just purchased a late painting by Beckmann called Perseus' Last Duty (1949) -- story here.  This is a powerful, challenging work with some clear connections to both The Argonauts and obviously Departure.  I haven't been to the Cleveland Museum in probably 5 or 6 years, when I was there for work on a semi-regular basis, so I obviously haven't seen this painting in Cleveland and don't believe it was on display at the NYC art dealers I occasionally visited.  While unlikely, it is possible it would have made its way to the massive annual art fair at Chicago's Merchandise Mart, since the painting has been on the market for a while.  I probably won't make it back to Cleveland for another 5 or 6 years, but I will try to make a stop by the museum if I am ever in town (and hope this on view).

Here is the work: 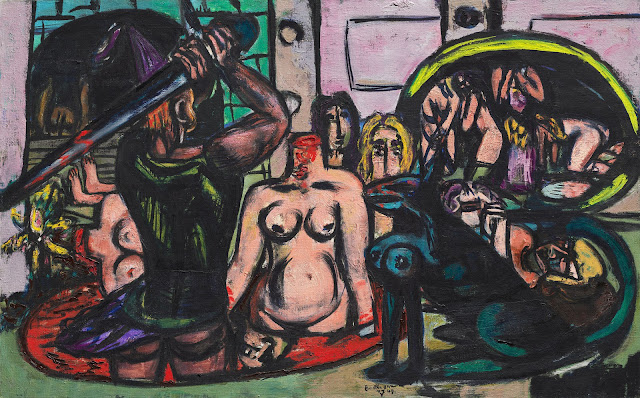 I can't quite get over this idea that I have seen this painting somewhere, possibly in Chicago or New York in 2001 when it was up for sale by Sotheby's (before this more recent sale to the Cleveland Museum of Art).  I assume that Beckmann is referencing Manet’s A Bar at the Folies-Bergère, though here the trick mirror is showing a slightly earlier point in time before the maidens were killed.  (I honestly have no idea what part of the Perseus legend Beckmann is referencing, since it doesn't seem these women are Medusa and her sisters -- seems more like Odysseus coming back and killing all the household maids.)  The dog(?) with the big breasts seems to have wandered in from some Egyptian myth, but perhaps provides a linkage to the dark, busty angel from The Temptation of St. Anthony.  Anyway, quite a fascinating picture, and I will try to get to see it someday.  I think it's great that it is in a public museum (and probably will be on display a lot more regularly than Falling Man for example).

Edit (2/22/2019): I probably should have updated this a while ago, but just didn't get around to it.  In the 6 years(!) since I wrote this post, I did make it to St. Louis, Minneapolis, Davenport, Cambridge, MA and even Cleveland (to see the Impressionist in the Garden exhibit).  I have definitely seen all of the triptychs in person (at least once) with the exception of The Temptation of St. Anthony, which is held in Munich.  However, I still haven't seen Falling Man again, as it appears to be in deep storage at the National Gallery (incidentally The Argonauts is also not on view at the moment, though I've seen it periodically since 2013).
Posted by Eric P at 9:44 AM