The edition of Gabrielle Roy's The Tin Flute that I have (New Canadian Library) has a quite useful Afterward.  It indicates that Roy planned on centering the entire novel on the love story between Florentine and Jean, but that Florentine's mother Rose-Anna entered the story and more or less took over.  The introduction sort of suggests that Florentine and Jean are pushed to the side, though I didn't find that to be the case.  Nonetheless, the mother does become a central character, and she struggles to keep her family housed and fed.  Her husband, Azarius, while not the typical "brute" one encounters in stories about the poor, is simply not capable of hanging onto a job for any length of time.  Apparently the only thing he was good at -- and could stick to -- was carpentry, and the demand for his services completely dried up during the Depression.  But his mental outlook did not help either, fatally attracted to silly "get rich" schemes and simply too proud to stick it out at the somewhat menial jobs that he did get, typically through Rose-Anna's intercession.  It seems that the family's main source of income is actually the salary (and tips) that Florentine gets from her job as a waitress. 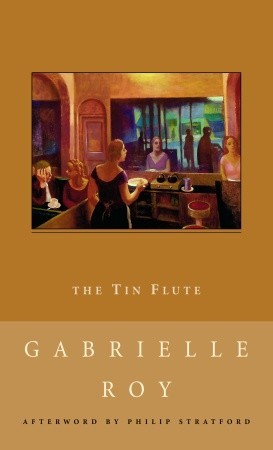 This is actually an important link because Jean meets Florentine through her job at the lunch counter at a Five and Dime (so a bit more down-market than a stand-alone restaurant).  She is a fairly efficient waitress, but she is too inexperienced to be particularly good at fending off men.  Indeed, she is intrigued by Jean, who acts a bit stand-offish and mysterious but who still flirts with her a bit.  She decides to see if Jean is serious when he asks her out.  As it happens, he is torn between his conflicted feelings for her (partly aroused & intrigued in spite of himself and partly pitying of her under-nourished childlike frame) and his burning desire to better himself and escape from the poverty he was born into.  (When we get a glimpse of his self-improvement regime, it comes across as even more crazed than Jay Gatsby's...)  He also saves up to eat out once a month at a much nicer restaurant in a better district.

Jean mostly holds himself apart, definitely from the men he works with and even to some extent from the young men in the neighbourhood.  He's a bit of a loner and definitely feels himself to be better than the men in Saint-Henri.  However, he still stays in some contact with a slightly better-off young man, Emmanuel, who has actually voluntarily enlisted in the Army.  (Canadian troops are being mobilized for WWII.)  This mobilization ends up proving quite important for the Lacasse family in somewhat unexpected ways.  While one the one hand, one can argue that it acts essentially as a deus ex machina, altering the likely trajectory of the Lacasse family (and for that matter Paul Tallard's fortunes in Two Solitudes), WWII really did completely change the face of Canada and the U.S., pulling these countries out of the Great Depression.  (To me those revisionists who say otherwise seem completely misguided.)  I just saw some quite powerful images of Toronto from 1904 (when it had its own Great Fire), then a bad breakout of influenza in the late 1910s and then basically a decade of Depression.  It really was quite a tough period to live through!

I'll return to this topic (of Canadian mobilization) after the spoiler break.

Anyway, the Lacasse family's lot is a particularly hard one.  They seem to get behind on the rent every year, and have to move, often in a huge rush, due to the inability of the father Azarius to hold a steady job.  It shouldn't be a huge surprise that he messes up all the time.  One of the most disappointing events is when he decides to show off a bit and borrows a truck from work so the family can make a trip to the countryside where Rose-Anna's family lives.  The trip doesn't go as planned (to say the least) and it leads to him losing another job in disgrace.  But what is even more upsetting to Rose-Anna is that her mother sees through them immediately, and realizes just how poor they really are.  She probably would have been better off staying in the country, and this is a tough thing for her to swallow.  Of course, what really would have helped Rose-Anna out is access to birth control and not being under the spell of the Catholic church.  She has a baby every year, and each one is generally sicklier than the last, though none are quite as bad off as Daniel.  While her mother is (quite properly) critical of Rose-Anna's husband, what is astonishing is that her husband's own mother warned her that he was an incurable optimist with his head in the clouds and that they would likely be poor!  Just wow.

We meet a few additional people in the Saint-Henri neighbourhood, which is home to the Lacasse family.  Most of these people are somewhat down on their luck and drink their problems away.  Azarius is a bit of a big talker in the taverns (he reminds me a bit of Gabriel from Tremblay's The Fat Woman Next Door is Pregnant, though even a bit softer in the head).  Jean interacts to some extent with a slightly edgier crowd of disaffected youth, though he does have a passing acquaintance with Emmanuel, whose family is fairly well-to-do by the standards of Saint-Henri.

Now, Saint-Henri was fairly close to Le Plateau-Mont-Royal, which is where Michel Tremblay sets most of his semi-autobiographical writings.  Both were densely settled and largely working class.  The general impression I get from the two books is that Le Plateau-Mont-Royal had just a slightly higher social standing, perhaps because a portion of it was "mixed", that is to say partly Anglo but mostly French.  Interestingly, Mordecai Richler was also from Le Plateau-Mont-Royal. At some point, I will just have to read Richler's The Apprenticeship of Duddy Kravitz, which I think I've owned and parted with (unread) twice now.  (I'm probably better able to appreciate it and put it into context now.)  I do have the impression that the "Tremblay family" wasn't struggling to nearly the same degree as the Lacasse family was.  In general, The Tin Flute is a moving yet often depressing book.

Now for some SPOILERS -- some quite significant SPOILERS in fact.  So do not read on if SPOILERS bother you.

There are two (or even two and a half) moments that I find particularly hard to swallow.  First, while Rose-Anna fully recognizes what a pushover she is when it comes to the men in her life, she keeps letting them get away with it (and while she feels guilty about relying so much on Florentine, she still keeps doing it).  She really does not lay into her husband the way he deserves.  What may be even more painful for me to read is when her eldest son Eugene enrolls in the army and gives her his signing bonus.  Then he comes back around and takes it when she needs it for rent money and blows it on a floozy.  She definitely needed to have stood her ground then.  Down the road she does get Eugene's army salary, as well as her husband's.  Going off to war seems to be the only way he can think of to provide for his family.  While Roy seems to suggest this will be good for him (a place he finally can fit in and even thrive as he is apparently on the road to promotion to sergeant), I can also envision a future where he starts bucking authority and ends up in a great deal of trouble.  But let's stick with the more optimistic ending, as the family certainly did have its share of tragedy.

To return to Daniel, he is a sad case of a child who cannot thrive under these slum or near-slum conditions.  If I recall from the book, Rose-Anna really was so poor that she couldn't even keep the children properly dressed and started keeping the younger ones home from school!  Talk about misplaced priorities, i.e. it isn't only her husband who is sabotaging their future.  Anyway, Daniel really wants a toy tin flute, and Rose-Anna comes close to buying one for him instead of some other necessities, but she resists.  It almost seems like this will become Daniel's "Rosebud," but actually his condition worsens to the point where he is taken away from the family to a clinic where he gets to play with a tin flute and other toys.  He bonds very closely with an English nurse, which is fairly heartbreaking to Rose-Anna when he calls out to the nurse (Jenny) more than to his own mother.  But he doesn't pull through.  I guess this is believable but still tough to read.

Perhaps the most annoying plot point is that, despite everything, Florentine keeps dating Jean in a somewhat desultory fashion and has him come over to her house when her family goes to the country.  They have sex just one time, but that is enough.  I mean, yes, this does occasionally happen, but it is such a lame (and even slightly misogynistic) trope for a girl to get knocked up the one time she slips up.  But I guess like mother, like daughter, and the Lacasse women are hyper-fertile.  What is an interesting twist is that Roy doesn't take this opportunity to turn this into a public service announcement about why it is always better to save oneself for marriage.  Emmanuel has been kind of sticking around in the background and is quite enamoured of Florentine for some reason.  Florentine realizes that she doesn't have a passionate love for him, but he is a caring person that she could come to appreciate and (perhaps) be a good wife to.  She manages to date him briefly, and he rushes to marry her before he is sent overseas.  It is even hinted that he knows Florentine is actually pregnant (my half objection), but I just find that extremely hard to believe, particularly in that era, though I will allow that he may be aware that Florentine is not actually a virgin, which is in its own way pretty enlightened.  So Florentine appears to have lucked her way out of poverty, provided Emmanuel comes back from the war.  It isn't as clear about her mother, who still has far too many children but finally a steady source of income.  I'm not aware of Roy ever returning to any of these characters to see how they were doing after the end of the war, but it is hard to imagine them being left off any worse, again provided the menfolk returned from Europe.

For me, The Tin Flute is the better novel with characters that made more believable, if somewhat unfortunate, choices.  The depth of Florentine and Rose-Anna, particularly in their various disappointments, was greater than anything I found in Two Solitudes, though Athanase Tallard was occasionally an intriguing figure.  The Tin Flute wasn't just a sociological exploration of the poor of Montreal and the way WWII impacted them, whereas Two Solitudes sometimes felt like it was too wrapped up in explaining why Anglo and French Canada just didn't understand each other.