You'll have to jump down a few paragraphs to get to the actual review of Jane Urquhart's new novel The Night Stages.  If you have been following the reviews in the national papers, it is established early on that the novel kicks off fairly early with a woman (Tam -- short for Tamara) getting fogged in at Gander Airport in Newfoundland for 3 days.  She is somewhat astonished by the massive mural in the passenger lounge and this stirs up various associations to her past.  I'll get to this shortly, particularly the fact that in the end the novel is barely about Tam and far more about two brothers (with one of whom Tam is in a fairly unsatisfying love affair) but even the real-life painter of the mural, Canadian artist Kenneth Lochhead.

Still, this set me pondering about novels about airports.  As far as I know there are only a very few books set entirely in airports, though air travel itself can play a prominent role in any number of novels.  In terms of the ones I am aware of, ostensibly the closest is Rana Dasgupta's Tokyo Cancelled, which is about a number of travelers stuck in a remote airport trying to reach Narita Airport, which has been snowed in.*  The ones that can't find a hotel end up sleeping over in the passenger lounge (much like Tam) and then tell stories to each other to pass the time (though she is telling stories to herself).  The set-up is very reminiscent of Chaucer's Canterbury Tales or maybe even more precisely Boccaccio's The Decameron.  (I had extremely high hopes for Dasgupta's novel or rather collection of tales, but ultimately found it quite disappointing.  Is it giving too much away to say the pattern was repeated for The Night Stages?)

Interestingly, there is a Can-lit connection with airports when turning to Carol Shields' Departures and Arrivals.  This is a play made up of a number of episodes that are essentially overheard conversations between groups of people just arriving and just leaving the airport.  Not surprisingly, it is the pilots and stewardesses who appear multiple times, since they in some sense treat going to the airport the way the rest of us treat the daily commute.  While aspects of the play have dated, it had some interesting moments; I'd go see a production of it if it is staged in revival.

I haven't read it, but there is a fairly recent (2011) book of short stories all set at Heathrow by Tony Parsons.  I'll try to check that out relatively soon.  I suppose Walter Kirn's Up in the Air (the novel more than the movie) cheats a little in that we see the narrator in settings outside the airport, but he is a million-mile flyer and certainly does seem to spend the majority of his life in airports waiting to make all these flights.

Let me start with the mural at Gander Airport, which is at the heart of The Night Stages.  It is indeed an interesting mural.  I'm not sure it is actually worth a trip out there just to see it, but if I happen to be out that way in Newfoundland, I'll try to make a side trip.  (My upcoming trip to Halifax and Charlottetown doesn't quite get me far enough.)

As it happens, there are two airport murals that have a reasonably connection to the Lochhead mural.  One is essentially lost, but two panels (out of 10) of a mural by Arshile Gorky for the Newark Airport Administration Building were salvaged are were eventually transferred to the Newark Museum.  I've seen them a couple of times, the most recently in 2010 (or so) on a visit to Newark that coincided with their exhibit Constructive Spirit.

It is certainly a shame that the rest of them were lost.

One mural that may be even closer in spirit and conception to Lochhead's was in danger of being lost but is now under national heritage protection.  This is Flight by James Brooks, which is in the Marine Air Terminal at LaGuardia.  I've seen it once and took my own photos, though I can't find them at the moment.  If I recall, the shuttle from New York to Boston normally leaves from this terminal, and I have to say it is almost worth taking that service just to go in and see the murals (or I guess if I had a particularly long layover I could walk between the terminals).  Anyway, it is pretty incredible, since it is a 360° panorama. 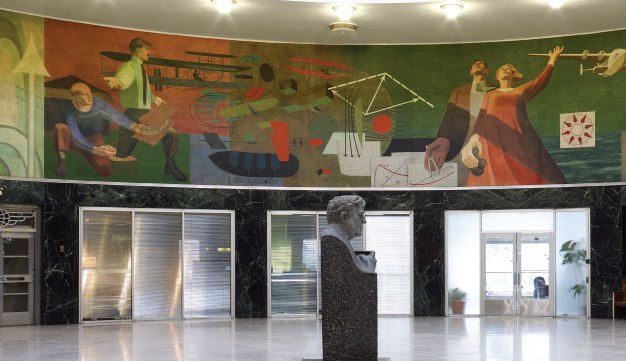 That's probably enough about murals for the moment.  On to the actual review.

There'll be SPOILERS ahead, to be sure.

In a few reviews that I have caught, there are suggestions that not is all that it seems in this book.  Mostly notably, this is an Irish novel passing itself off as Can-con.  Even Kenneth Lochhead, who is an actual Canadian painter, has most of his formative experiences in Europe or at school in Philadelphia.  But really the core story is about two Irish brothers.

I honestly cannot quite understand why Urquhart includes the passages about Lochhead, since they are so dissimilar to the rest.  I think just possibly she was going for something like Robertson Davies's Cornish Trilogy where one could argue that the life experiences of one artist go into creating a masterpiece (or maybe it was a masterful forgery -- it's a bit foggy) and then we see how others respond to that art and it evokes different reveries and connections to their own lives.  At least I think that was Urquhart's intent.  However, Lochhead's life was fairly mundane; even the way his ties with a prominent New York art critic** were severed is kind of cliched.  This review indicates that Urquhart actually knew Lochhead casually, and she might have wanted to memorialize his achievements in some way, but got started and then realized she probably there wasn't much there there.  In order to extend it to novel length, she would have had to make the novel revolve around the kind of upheaval and bad behaviour that seems to come along with the artistic temperament, seen to some extent in Maugham's Of Human Bondage and even more prominently in Cary's The Horse's Mouth, and she opted not to do that (probably wisely).  Writing about friends and family in anything but the most flattering light is a good way to lose friends and alienate readers.  (I've sort of alluded to this a bit in my posts about Sharon Olds -- here for example).  And in countries that are more aligned with English law, libel suits are always a danger, even for a novelist (this contrasts significantly from the free-for-all in the U.S. that stems from a very robust reading of the First Amendment).  Of all the insights that we receive from the Lochhead sections, the ones tied to his time in Philadelphia are probably the most interesting, and that might have made a reasonable standalone short story, but doesn't work for me in this novel.

I liken the structure of this novel to a juggler juggling three completely disparate items -- an apple, a rubber chicken and a wrench.  Yes, it can be done, but only fairly awkwardly, and it is never as elegant as a juggler keeping 3, 4, 5 or even 6 evenly matched and balanced balls in the air.  I'm not (entirely) opposed to complicated novel structures -- flashbacks and shifted perspectives and so forth -- but I like them to have some internal logic.  A novel that shifted back and forth between two brothers would make sense.  I just thought this novel was problematic in that the Lochhead sections had no relation whatsoever to the rest of the novel, aside from Tam reading her life-story in the mural, but again, she had no idea of what Kieran's life was life (even when Tam's lover Niall opened up towards the end of the novel as talked about his long-lost brother, he had only the vaguest idea of what he had been up to).  Anyway, I thought the connections between the sections were extremely tenuous and didn't work for me, though many readers were positively inspired by this unusual structure.†

I found Tam a very uninteresting character -- a bit unpleasant in her youth and then too weak and even spineless when she kept going back to the caddish Niall.  I just didn't find anything written about her worth the reading.  Niall himself was a bit more interesting but didn't quite gel for me.  He seemed a bit too self-aware to be such a terrible person (forcing his wife to marry him even though it was clear 1) he didn't really love her and 2) she was in love with his brother), though I guess some of the characters in O'Neill's Long Day's Journey into Night are roughly as aware of their own weak, spoiled natures.

I thought Urquhart went a little heavy on the Irish setting, trying too self-consciously to make this into an Irish legend, i.e. an updated Gog and Magog. But I never felt she had earned this; it was sort of like throwing on someone else's (narrative) cloak and borrowing someone else's glory.

Still, watching Niall’s younger brother Kieran learn about the old Irish ways while simultaneously becoming a fierce bicycle rider was reasonably rewarding.  Where the novel strains is when Kieran falls hard for Niall's fiance.  Why is it that there is only one girl in the whole village that two brothers (or a son and a father -- pace O'Neill's Desire Under the Elms) must love?  I guess in this I am more frustrated with human nature than relying too much on narrative coincidence, since this kind of sibling rivalry has been around for thousands of years.  But what is too convenient is that the two brothers are both training (unbeknownst to each other) for the major bike race called the Ras.  I mean, Niall has a pretty consuming job as a weatherman.  How did he find the time to train for this race?  At that point, I was pretty much through with the book and did not find myself all swept up in the race (which happens to all be told second-hand through Niall's retelling of events to Tam and not switching back over to Kieran's direct perspective).  Even the coda at the end was pretty unconvincing to me.

Overall this is a book that has some nice writing in sections, particularly Kieran's middle to late childhood, but one that was constructed in a way that turned me off.  It is also a book that the more I think about it, the more I find it wanting -- a bit pretentious and predictable.  (I actually like it less now than when I finished it, which is not a good sign.)  So clearly this isn't a book I would recommend, though I recognize some people will definitely eat it up.


* I only just ran across this New Yorker cover by Adrian Tomine from Dec, 26, 2005 (roughly a year after Tokyo Cancelled was published). There is no particular reason to think it was directly inspired by Tokyo Cancelled, but it is at least possible there was a link.  (Cool cover either way.) ** I think this critic is supposed to be a stand-in for Clement Greenberg, who actually did "tutor" Jack Bush of the Painters 11 for a while, although Harold Rosenberg did promote another Canadian painter, William Ronald, for a time.

† Not everyone is a fan, however, and the reviewer in the Globe and Mail is just as frustrated with the novel's structure as I am.