It was about a month that I stopped by the Word on the Street Festival to hear Ann Choi reading from Kay's Lucky Coin Variety.  She was one of 5 finalists for the Toronto Book Award, though in the end she wasn't the winner.  Still, very impressive for a first novel to be given so much attention! 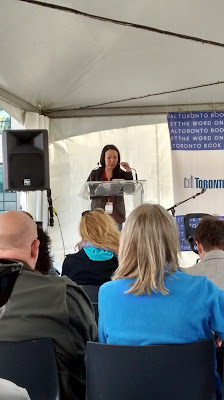 In a way, her story is quite inspirational (she had been living with the idea for this novel for something close to 20 years and then finally took a writing course where she managed to finish it and find an interested editor, which is almost a fairy tale story in itself) but in other ways it makes me a bit jealous that I haven't pushed through as much, and that a few of the gambits I have used just haven't worked out (the writing group didn't pan out, I am having trouble getting my work staged, etc.).  In different ways, I am jealous of the author of Floating City.  Given that there is a bit of deviance in both books, I thought about writing a gigantic review combining the two, but there will be enough asides if I just focus on Choi's novel, so I'll just do that.

In her comments before the reading, Choi said it was great to be part of a movement where Asian-Canadians got more recognition, and she was thrilled that Kim's Convenience had gone from a successful play to a network sitcom.  (I've generally heard good things about this show, and probably I'll check it out some day (whenever I actually start watching TV again).)


One thing that the sitcom and the novel have to do is spend a bit of extra time explaining Koreans to white people, so there is usually a bit about why Koreans, or at least older Koreans, hate the Japanese.  (To be fair, I have a fairly similar moment in Corporate Codes, though it is a young Chinese woman voicing the same thoughts.)  In particular, Choi needs to discuss why Koreans are so concerned about face and not sharing troubles with outsiders, since quite a few plot points in the novel don't quite make sense if only people talked to each other.  In some ways, the main character Mary (Yu-Rhee) is a bit unstable in the sense that most of the time she is quite passive, but then at other times she is quite assertive when the plot calls for it.  It is quite hard to believe she would have been quite so forthright (or even rude) to Joon-Ho's mother.  If she was so strong in this case, then why wouldn't she have been tougher with her own parents to stop putting Joon-Ho on a kind of pedestal?  I mean, some of this can be explained by a fairly immature girl caught between two cultures and not quite knowing how to fit in.  Even so, Mary made a few quite bad choices, like calling her stalker up after her brother went looking for him.

I think my biggest issue with the novel was that it basically was a bit too melodramatic.  There are about 6 major traumatic events in this book when 2 or at most 3 would have been a bit more realistic.  I do feel less is more in a novel that is already trying to do a lot in terms of showing how Koreans fit into Toronto.

As a lesser complaint, I was kind of disappointed in the portrayal of Will Allen, who was her English teacher.  After she graduated high school, she more or less seduced him and they have a short fling.  I wasn't quite as horrified over that as some people.  (I grew up in the 70s and early 80s when a few teachers (and particularly college professors) married former students.  While there are power imbalances to be sure, they didn't seem any worse than in most marriages.  Of course, today's morality police view things in black and white terms and don't recognize the complexity of people's desires.  But that's definitely a discussion I don't want to get into today.)

In a way, it is kind of a neat twist that she lands the blue-eyed guy of her fantasies, and then finds out he is really not quite what she wanted after all.  I didn't mind that, but I felt Choi made him such a small, weak character when all his frailties were revealed.  I would have liked a slightly more nuanced (or perhaps more generous) view of Mr. Allen.  It is a bit hard to believe he could have been such an inspirational teacher and yet was so moody at home and so blind to his own shortcomings as a writer.

The other thing that was sort of interesting, but perhaps a bit disappointing, was how telescoped her college years are.  Her entire college career is covered off in 5 pages or so.  I think there were mostly there to make a point that she has succeeded in Canada, even though it was her parents’ dream not hers to come to a new country.  Ann Choi herself seems far less ambivalent about trade-offs about growing up in a different culture.  She was glad to be a Canadian and very glad that her mother, in particular, had given up a career as a school teacher, to come to Canada for a chance for a better life for her children, including Ann.

On the whole this was an engaging read, and I did read it in only a few short bursts.  While the novel is a tad too melodramatic, the interactions between the family members, particularly Mary and her brother Josh rang true.  I particularly liked the way the novel "triggered" me into recalling Toronto in the early 90s; even though the novel is largely set in the mid 80s, many aspects of Toronto hadn't changed that much by the time I rolled into town.  I guess more than anything else, Kay's Lucky Coin Variety (and the portrayal of sad-sack Mr. Allen) ought to serve as a big kick up my backside to get working on my novel.  Maybe one day I can read to a crowd from my published book and be as excited as Ann Choi was at Word on the Street.
Posted by Eric P at 8:05 AM