It is such a disappointment when a book that we think will turn out well ends up being not as good as we hoped.  Maybe the disappointment is even greater than reading an even worse book about which we had no preconceptions.  In any event, I found Ferry Tales: Mobility, Place, and Time on Canada's West Coast by Phillip Vannini to be a significant disappointment.  I had actually seen Vannini present some this research at a conference (in Victoria actually), and it was pretty interesting.  He had a slick presentation with video of the ferry and interviews with some of the passengers. There is website still up and running with much of the multi-media content, and that is worth a look here.  To me, this is closer in spirit to that presentation and is definitely the most enjoyable part of the Ferry Tales experience.

It's hard to pinpoint where the book goes wrong, but I'd say a large part of it is Vannini's adherence to postmodern social science.  There are certainly important things to be said about the difficulty of true objectivity, particularly when interviewing subjects (i.e. doing traditional ethnography); however, in many cases (and particularly this book) it actually seems like a cheap move to end up talking ad nauseam about the observer and his (or her) decisions about how to go about informing participants of their involvement in a study.  In this case (and a few others that I can recall), all this concern about the motivations behind doing a study just ends up putting the author at the centre in a way that isn't actually very enlightening.  I knew far more than I wanted to about Vannini and his step-kids and their trips on the ferry (and waits for the same) than I really wanted.  I know that Vannini really did interview scores of other passengers, but not enough of that comes across.

More fundamentally, I can't tell what he really is recommending with regards to ferry service off the B.C. coast.  Perhaps I found his style so annoying by that point that I no longer was very receptive to his proposals, but it really did seem to boil down to B.C. Ferries = bad.  He seems to want B.C. Ferries reorganized as a kind of non-profit cooperative or something.  He doesn't like that they cut back service and raised fares and essentially wants a bottomless subsidy to the ferry system.  From my perspective, this is unreasonable.  People do make decisions on current conditions, but they also have to be aware that things change.  They in turn have to make new decisions (like moving to a different (and closer) island with more service) if the new conditions are no longer suitable.  I don't feel it is my obligation to support people who want to pretend that they are Robinson Crusoe with a perpetual subsidy.  (And I didn't find Vannini's comparisons of supporting the highway network as the same thing as supporting ferry service to be convincing.)  Frankly, I can't quite understand why Vannini doesn't encourage the islanders to start their own informal ferry service(s), since surely most or at least many of them do have their own boats.  That seems to fit much more in the spirit of what he thinks is suitable for the islands -- and would promote independence and "agency" for these folks, rather than just being bound to an agency like B.C. Ferries and the vagaries of provincial financial support for ferry service.

I should say this isn't a terrible book and it contains some interesting nuggets, but I was expecting so much more.  I would recommend poking around on the website and if you really enjoy that, then consider checking out the book, but be aware that you may know more about Vannini than you want by the end.

Since this is my blog and not a supposedly objective academic book, I will enclose a few photos of my family trip on the main ferry from Vancouver to Victoria.  We lucked out and had a really nice time on the ferry -- windy but sunny.  Even the return trip wasn't too bad, though a little overcast.  Getting to and from the ferry (via bus) was by far the worst part of the trip. 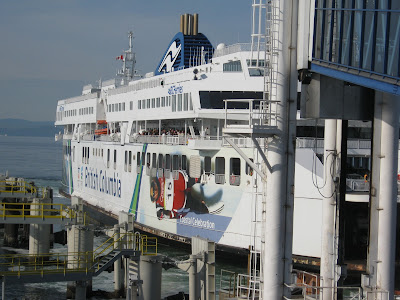 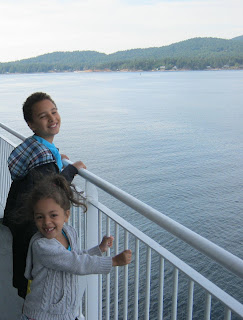 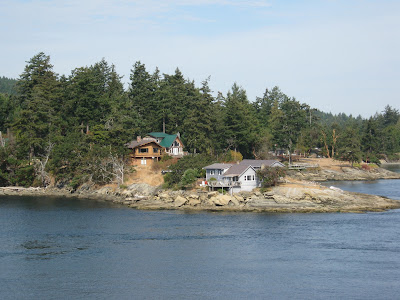