William Kurelek is an interesting case. He had studied as an artist, but his approach to his subject matter came across as quite naive for a 20th century artist and certainly vastly more religiously oriented than most of his contemporaries.  He really strikes me as an outsider artist, like Grandma Moses or Howard Finster (perhaps a more apt comparison) but with more training.  In terms of the actual look of the art, it is often a mix between Bruegel and Hieronymus Bosch, at least for the more intriguing pieces.  What is actually kind of odd is that Kurelek also painted more domestic scenes where he does look a lot more like an outsider artist and the style is much less refined.  I assume this was deliberate.  (It took me a while to fix the images below.  Hopefully there will be no further problems.  Sorry about that for those early viewers.)

I really knew almost nothing about Kurelek, but I was visiting Toronto and stopping in at the expanded AGO.  I was pretty overwhelmed at the new galleries, particularly the Thomson Collection on the 2nd floor.  There was a room devoted to Kurelek, who was really completely new to me, whereas I was pretty familiar with the Group of 7.  This domestic scene of a bachelor was by far my favourite. 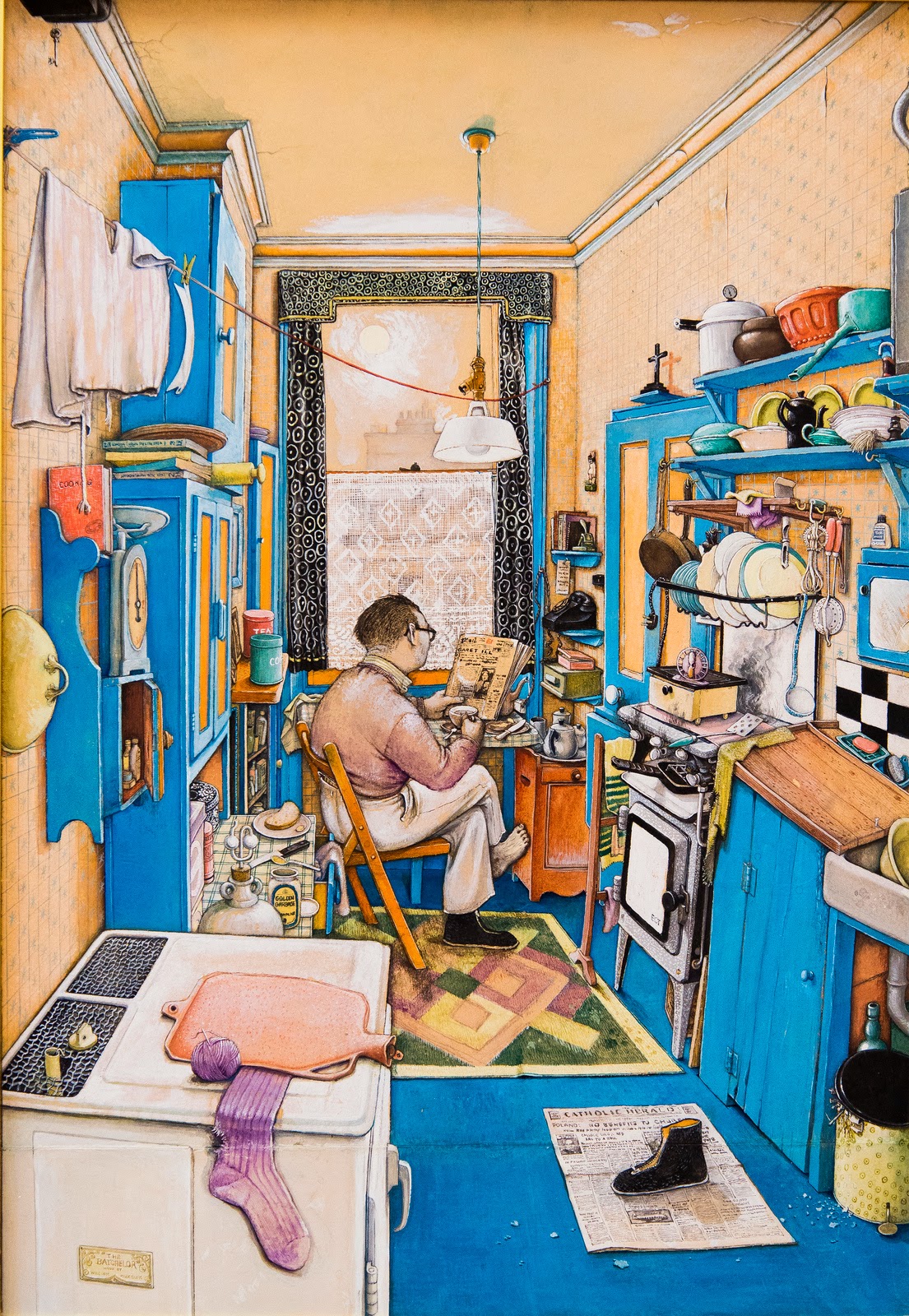 Now what is particularly odd is that not a single Kurelek painting shows up in the AGO's on-line highlights of Canadian art, but in the book that AGO published on the Thomson collection Kurelek has his own chapter and this image is included.  (I don't have any awareness of what goes on behind the scenes at the AGO, but I suspect that the current curators aren't particular fans of Kurelek.)

Despite Kurelek's very public Christianity, he was a bit more sophisticated in his dealings with the art world.  He did a number of paintings that are essentially aimed at the middlebrow crowd.  He published books of paintings based on several of the provinces, as well as "the north" and Toronto.  While he has faded from popular view, he had published calendars of these domestic scenes.  O Toronto has a number of these paintings, including this one of a snowy street. 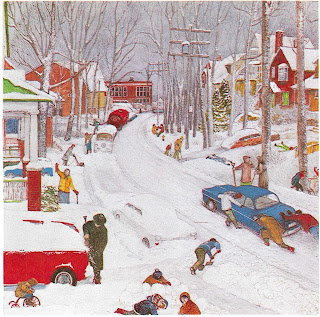 The O Toronto book is a bit more interesting than the others in that his religious paintings do spill over and kind of overwhelm the more domestic scenes.  So we have Christ on the steps of the old provincial capitol building, completely ignored by the busy Torontonians on the sidewalk in the foreground.  A detail below: 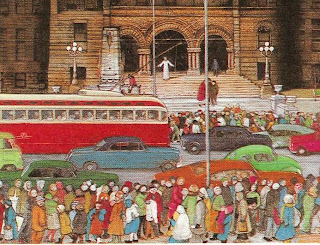 (Kurelek does draw the people a bit more realistically than L.S. Lowry for example, but the feel is somewhat similar.) "Harvest of Our Mere Humanism Years" may be Kurelek's most famous painting, which cribs so heavily from Bosch that Kurelek should have paid royalties (joke).  It is also included in O Toronto. 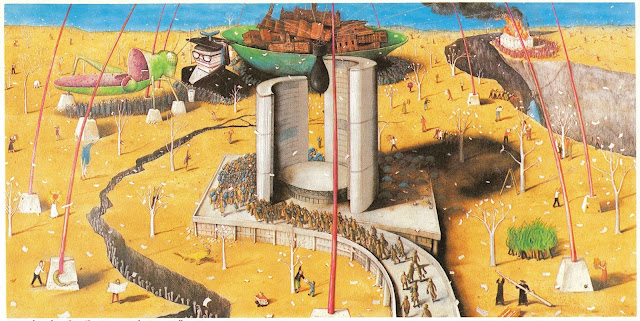 While I find this an interesting painting, it is so opaque to me that I have no idea what Kurelek is actually getting at (much like Bosch in fact).  Apparently, the bomb is about to drop on the modernist Toronto City Hall, and all the learning that goes on at UT will be of no help at all.  I still can't quite wrap my head around why the fact that Canadians (rather than the Soviets) are humanist and/or godless is any more likely to bring about nuclear war, but so be it.

As it turns out, I was visiting Victoria last fall and apparently missed being able to see a major retrospective on Kurelek by about a week or two.  Review of the exhibition here.  Now that I have seen the catalogue of the exhibit, and I have to say that I really only wanted to see 3 or 4 pieces up close, Harvest among them.  (Harvest apparently belongs to Manulife Financial and is in their Toronto HQ, but it isn't at all clear how one goes about asking to view the painting.)

The truth is that the more I learn about Kurelek, the less I like him.  He truly was a religious fanatic and frankly much of his art is lousy.  When it isn't overtly religious, it is sickly sentimental.  So for instance, this one is titled "Hope of the World" (a cross in the window).  Gag me with a spoon. 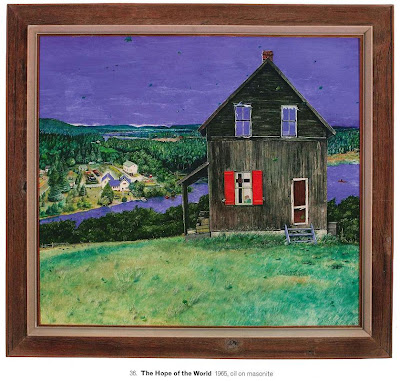 In contrast, some scholars (though not all) claim that the tiny cross in the window in this Max Beckmann painting ("The Night") serves the same general purpose, though it seems to me that it is by no means clear that the tiny cross will triumph over the general degradation of the times.  The painting can certainly be read ironically as well.  And despite its intentional ugliness, the artistic quality of the Beckmann piece is just so much higher than what Kurelek achieves.

There does not appear to be a clear consensus on whether Max Beckmann was conventionally religious, though his early work was occasionally on religious themes (like Christ and and the Woman Taken in Adultery or Descent from the Cross).  In most of the later works, working in his high Expressionist mode, Christianity and legends from various other mythologies are combined in a style that suggests to me Beckmann was on the same wavelength as Joseph Campbell (of The Hero with a Thousand Face).  One aspect of his personal history that cannot be overstated in its impact on his art (and his general outlook on life) is that Beckmann was targeted by the Nazis for being a degenerate artist in 1937.  Beckmann wisely left Germany immediately and lived in Amsterdam for 10 years; apparently the U.S. officials -- to their great discredit -- refused to grant him a visa.  He was able to move to the U.S. after the war but only lived another 3 years, primarily in St. Louis and New York City.  Beckmann was also very aware of the depths that humanity had sunk to, but unlike Kurelek this was from first-hand knowledge and not an abstract notion that humanity had abandoned Christianity (observed from the relative comfort and safety of Canada).  In an upcoming post, I'll try to write more on Beckmann's triptychs, many of which I have been fortunate to see in person (6 of 9, I believe).

Back to Kurelek, I basically cannot shake the feeling that he is a religious prig who would have been really unpleasant to be around (there is another painting where young people are massed in this near orgiastic state, just waiting to get paired up, by the devil apparently).  It's a little hard to see at this scale unfortunately. 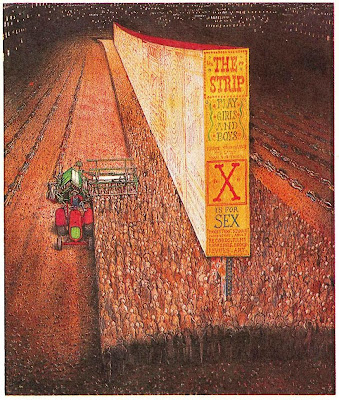 One painting included in O Toronto but not in the exhibition is this one called "Our My Lai, the Massacre of Highland Creek."  While it is hard to see in the small reproduction, the buckets are full of aborted fetuses, many of them near full-term babies.  Personally, I find this completely outrageous.  It just reminds me of the horrid tactics the right-to-lifers employ in the U.S., suggesting that nearly all abortions are late term and so on.*  As if doctors would just throw out aborted fetuses in a nearby stream (in buckets no less).  Though I have to admit the "blood" that seeps outside the frame at the bottom adds to the overall effect. 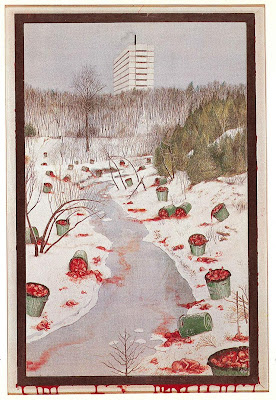 I wasn't too crazy about Kurelek up to this point, but this really caused me to lose all interest in him as a person and really as an artist as well.  It would have been interesting had the retrospective organizers had the courage to show the unvarnished Kurelek by including this painting, but they did not.  Most likely the controversy engendered would have been good for his estate.  As for me, I will steer clear from Kurelek, and I certainly won't be buying any calendars or prints of his paintings from here on out.

* Since this is my blog, I am not going to be publishing any comments from outraged Right-to-lifers, just so you know.
Posted by Eric P at 12:22 PM