As anyone with the slightest familiarity with Michel Tremblay knows, this book is essentially a love letter to his extended family.  It is actually the first of six novels in the Chroniques du Plateau Mont-Royal series.  I am not sure, but wouldn't be surprised if the hints of magic realism survive in the other novels, based on how he remains a bit of an experimentalist in his work for the stage.  Just for completeness, here is the list:
I found an inexpensive edition of the complete chronicles in French, and I'll attempt that one of these days.  I've heard that the translation (which is what I am reviewing) is a good one, but does miss out on a lot of the Quebecois slang. (Of course, I won't be able to pick up much of that in any case.)

One of the greater mysteries is how did the Fat Woman (essentially Michel's mother) end up in Montreal in the first place.  There are a few hints in this book, and more in the play For the Pleasure of Seeing Her Again, that she is from the Prairies and at least part First Nations (Cree, if I am not mistaken).  It's not even entirely clear to me that French is her first language (although it is true that there were more pockets of Francophone culture outside of Quebec earlier in the 20th Century, with most of them having disappeared by the early 2000s).

A much later series explores her back story.  These novels are:
I don't believe all of these have been translated yet, but by the time I get through the first six novels, they probably will have been.  Obviously, I can't speak to their style or contents, but it all adds up to a fairly impressive re-imagined family chronicle.

What I will say is that this is probably a family that one loves from the inside, apparently quite passionately in Michel's case.  From my outside vantage point, they seem like people I would steer clear of.  They are loud, argumentative, nosy neighbours, very stereotypically working-class in fact.  The menfolk are a bit more appealing, though Gabriel is portrayed as a bit of a coward and Edouard is a bit of an overweight, homosexual dandy.  I've forgotten exactly what Edouard does, but for some reason, I'm imagining him as working in a department store, selling shoes to women (a forerunner of Al Bundy?).  I'll have to come back around and fix this if it is grossly incorrect.  There is one other fact that I cannot clearly get correct -- the relationship of the fiddler Josaphat to the Tremblay family.  While I believe he is the brother of Victoire, he has some connection to the Fat Woman as well.  He has a daughter, Laura, who is quite a bit younger than the Fat Woman or Albertine.  Laura is also pregnant, as are many women on the street.

This is the family tree of the core characters, as best as I can reconstruct it.  As far as I can tell, the Fat Woman is never given a name, at least in this book.  I also might have the birth order of Gabriel and Albertine reversed.  Albertine does occasionally act like an old sister would, but is often ignored, which tends to support the idea that she is the middle child.  Edouard is definitely the youngest of the three. 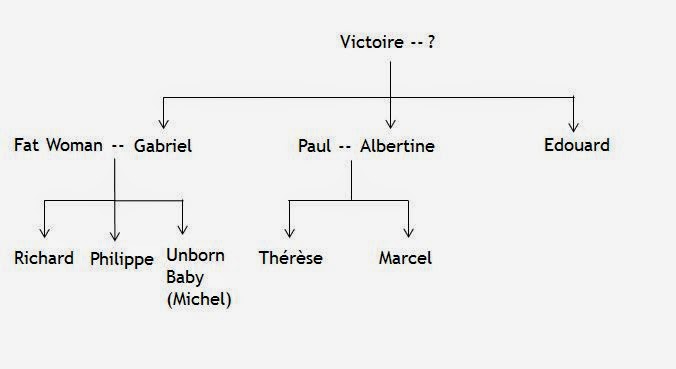 There are many other characters swarming inside this book.  There are two prostitutes, plying their trade just down the street.  While Albertine refuses to engage with them, particularly in a curious set piece where Gabriel invites them to dinner, the Fat Woman and Victoire bend conventions a bit and are reasonably sociable.

There is another woman who runs a candy shop and has a mangy cat, Duplessis (apparently named after a Quebec premiere).  The cat hardly gives her the time of day and is actually infatuated with the toddler Marcel (actually appreciating the fact he is often pee-stained).  I would say the sections from the viewpoint of the cat are the least interesting to me.

While she lives in a different part of town, there is an ex-whore who used to be a big player in Ottawa, sleeping with half the Cabinet.  She occasionally relives her glory days in front of her niece, who is a good soul but fairly straight-laced.  This fancy woman actually lost a leg to diabetes, but cannot conquer her love of chocolate.

There are several other bit parts, including a wild streetcar driver, and a young man filling in as a park attendant, who has a disturbing interaction with Thérèse, who goes up and kisses him on the mouth.  He becomes infatuated with this little girl (of about 13) and there are strong hints that he has been converted to a pedophile on the spot.  I wasn't too crazy about that section of the book, and I do wonder if he resurfaces in the later novels.

As far as the magic realism goes, the novel opens with a different woman and her three daughters, all endlessly spying on neighbours and knitting.  By their second appearance, it has become evident that they are some version of the Fates.  Only a very few people can see them, including Josaphat, Marcel, the cat and occasionally Victoire.  Josaphat also has been tasked with fiddling up the moon, and he apparently expects to pass this duty on to Marcel, who has this connection of being able to see the unreal.  Personally, I am not really sure what this adds to what is already an overstuffed narrative of working-class Montreal.  It will be interesting to see if the later novels are more fully realistic.  While Tremblay may have been aware of the magic realism coming from South America, it is more likely he is working in the realm of Greek and First Nations myths.

While the unborn baby will clearly some day be the inquisitive and sensitive artist Michel Tremblay, this is not really a case where the baby is soaking in these influences and is certainly not aware of the events on this day (so this is not quite comparable to Carlos Fuentes' Christopher Unborn).  However, the unborn baby does have an outsized impact on the family.  The Fat Woman discusses a few times how greedy it was that she wanted one more baby (and even a bit unsafe at her age in those days), and her husband went along, in part because he is a weak-willed man in love with her and at least in part because he didn't want to be called up for the WWII effort.  So he does internalize a bit of the contempt that outsiders heaped upon him.  He also promises to move to a bigger apartment but knows he will never do so, as he loves being part of a big family.

The Fat Woman can barely move, and essentially sits in a chair in her bedroom all day.  Albertine, never the most patient woman in the best of times, is forced to serve her food and even bathe her.  Albertine's frustrations at being in a cramped space and having to deal with her mother's odd requests often erupt.  She is often fairly cruel to Marcel, who is a demanding but basically good and loving child. It is hinted that she is actually glad her husband, Paul, is off in the war, and she has taken over his place at one end of the family dinner table.

Tremblay also goes into the travails of the other family members, such as the separate frustrations and longings of Richard and Thérèse (not for each other fortunately), and of their grandmother and Uncle Edouard.  This is quite an accomplishment, given all the characters in the novel.  One of the more amusing sections is when Victoire gets it into her head to go to the park, mostly as a way of punishing Edouard (who has to accompany her despite having a raging hangover).  She hasn't left the house in close to 3 years, so this is quite the outing (definitely shades of Grandmother Willoweed in Barbara Comyns' Who was Changed and Who was Dead, though I suspect this is too obscure to have inspired Tremblay).

Given that all the action takes place over a day (with occasional flashbacks) there are clear links to Joyce's Ulysses and secondarily to Dubliners.  This does seem to be Tremblay's attempt to do for Montreal what Joyce did for Dublin.  I'd say there are also clear ties to Proust, not only in the name-checking of Albertine, but that Edouard is a bit of a call-back to the somewhat grotesque figure of Palamede, Baron de Charlus.  (I will be curious to see how he is treated in later books, particularly if there is ever a scene where Michel comes out of the closet to Edouard.  It's hinted that the Fat Woman ultimately knew her youngest son was gay but this was never spoken of, at least in part because she died when he was relatively young.)  There is vastly more plot in Tremblay's work to be sure, and it is much more entertaining to read, even if I wouldn't want to live next door to this family in real life.  I think that's all I have time for now.
Posted by Eric P at 2:33 PM