While it was kind of omnipresent for a while in the early 90s, I'd actually never read Douglas Coupland's Generation X: Tales for an Accelerated Culture.  Or in fact any of his novels, though I did review his non-fiction book on Vancouver a little while back.

I actually liked his exhibit at the Vancouver Art Gallery a lot more than I expected, and a review of that is forthcoming.  So when I saw a copy of Generation X sitting up front at the Burnaby Library, I decided to grab it. 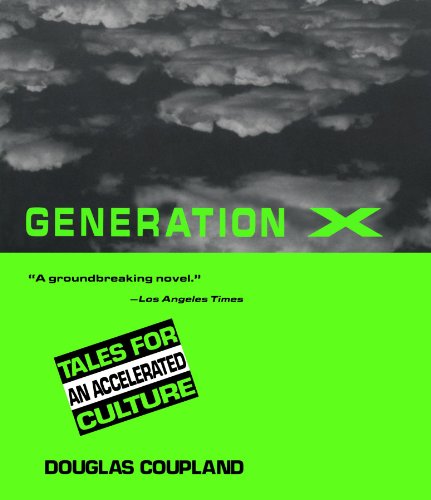 Generation X wasn't quite as flash or as shallow as I had sort of imagined.  At the same time, I'm still feeling that Coupland starts from some social science position he wants to illuminate and sort of builds around that framework.  The characters are really not much more than mouthpieces of their generation, and Coupland is kind of upfront about that.  There really is no one in the book on which one would really expend too much emotional effort.  But it was a moderately entertaining exercise, and it is short, which I am valuing more at the moment.  I didn't feel nearly as much nostalgia about these people in their early 20s as I did about the folks in Bogosian's subUrbia.  Even though I took a different path than any of them, I still could sort of recognize classmates in subUrbia, whereas I didn't know anyone who completely dropped out of life the way this trio did in Generation X.  (Now I am wondering what and how I will feel if I watch Winona Ryder in Reality Bites -- one of the Gen. X movies I assiduously avoided back in the 90s.) 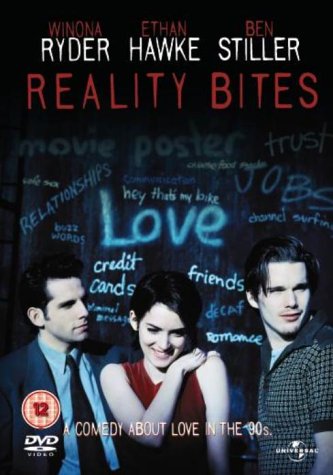 It does seem like Coupland's bunch (who somehow avoid shacking up together) are 5-6 years older than me (and most of the characters in Reality Bites and subUrbia) but I don't think that is really the issue.  It is more their general listlessness that I can't relate to.

What I do find interesting is that Coupland does tend to capture the zeitgeist fairly well.  There were loads of people who withdrew from consumer society, more or less successfully, during this period.  And notably, most of them did struggle to make it on their own in lousy McJobs, but only a relatively few went home again (Coupland sort of mentions this in a sidebar but it doesn't play a real role in the book).  The Gen Xers by and large did leave the nest, scraping by in dingy apartments or living with roommates long after college, but statistics show that is not nearly so much the case for the Millennials.  Truly staggering numbers are still living at home.  Granted they got an even rawer deal than the Gen Xers, but I just don't see this as healthy at all, either from a personal or societal standpoint.

One thing is that they probably have a lot of (deserved) internalized anxiety over climate change/global warming, but they really do not have the fear of nuclear annihilation that some of us did in the Reagan years.  I know I was affected, and I am a much darker person because of it.  (I believe this is basically the theme of Nancy Lee's The Age, which I expect to read in a few months.)  All I can say is that it is a good thing Reagan was dealing with Gorbachev and not Putin, or history might have taken a very unpleasant turn...

At any rate, the idea that everything can be lost in a flash seems more real to a lot of Gen Xers than to the Millennials (who may never have had anything that wasn't their parents' to begin with).  As much as there is no question that the fairly lousy economic hand dealt to Gen X is part of their general disaffection and dissatisfaction with contemporary life, another not-insignificant reason is the attitude: why bother if it's getting blown to Kingdom Come anyway.

Not surprisingly, Coupland latches onto this as well.  There is a generalized threat and dread (of nuclear devastation and other types of disasters) that is in the background of this book, though the characters do occasionally acknowledge it directly, as when Dag himself tells apocalyptic stories about bombs leveling shopping districts.

As if that weren't enough, Coupland raises the stakes. Dag accidentally spills radiated beads from New Mexico in Claire's bungalow, and she freaks out.  The nuclear threat suddenly becomes very real to her.  I actually wonder if she is really up for Dag's crazy plans to open up a hotel in Mexico, or is it just an excuse to get the heck out of Dodge (after her home has been violated)?

In general the book went along fairly smoothly, nothing too deep, but there were a few things that bugged me about it.  While it was only a tiny story within the whole work, it was just absurd that there was some cult that had a year that lasted only 1/7th as long as the "Western" year. That is just silly: while human societies sure can get up to strange things, the one universal is that a year is either based on a solar year (364-66 days) or lunar year (roughly 354 days).

I found the final image to be so strange -- the narrator (Andy) pulls over to see a huge cloud generated by farmers burning off a field after it has been harvested.  He is unbelievably relieved that it isn't an atom cloud.  However, while standing there he is attacked by a white egret and then is smothered (in a good way apparently) by developmentally challenged children on some kind of bus trip. A little too sentimental perhaps or symbolic or both. Nature (violently) communes with him, and then he gets all the human contact he can stand in a non-ironic way.

Finally, I did think Coupland tried too hard with the ex-mercenary character (The Boy with the Hummingbird Eyes), where the tale frankly came across as a bad retread of some MASH storyline, perhaps even from the finale.

Actually that is a decent segue to some of Coupland's sidebar comments, which put the action such as it is in the stories or the stories within stories into a broader context.  Coupland sure has a way with these little text bombs or pure aphorisms that he turned into posters for his art gallery show.

Here are a few I liked from Generation X:

Ultra Short Term Nostalgia: Homesickness for the extremely recent past.

Down-Nesting: The tendency of parents to move to smaller, guest-room-free houses after the children have moved away so as to avoid children aged 20 to 30 who have boomeranged home.

Occupational Slumming: Taking a job well beneath one's skill or education level as a means of retreat from adult responsibilities and/or avoiding possible failure in one's true occupation.

I can attest to the temptation of this last one, though I have been fairly ambitious in my work life.  Still, I basically changed my major to the humanities when it became apparent I would never be a star in either physics or advanced mathematics.  I don't regret too much about my career path, but I do regret giving up. However, sometimes sticking it out just to make a point can lead to really bad outcomes, such as being a depressed high school math teacher who never made the grade.  That would have been pretty terrible.  Or even worse, being just a substitute teacher.  Knowing when to fold them (as Kenny Rogers would say) is a critical life lesson that isn't emphasized enough.

So I have to admit I don't have really strong feelings for Generation X either way.  It seems to focus a lot more on the drop-outs from my generation than I would have preferred, and I think there were many of us that managed to carve out a path that wasn't a complete rejection of society nor a yearning for yuppie-dom.  But you can't really criticize a person for the book they didn't write, only the one that they did.  My biggest beef was that Andy was far too passive, but that was pretty much the point.  I don't feel I need to ask for the couple of hours it took to read this back, and I suppose that is sufficient.