As I mentioned, I came across a copy of Elizabeth Smart's By Grand Central Station I Sat Down and Wept mis-shelved at the library.  I'm not entirely sure when I heard the basic back story, but probably about a year ago. Elizabeth Smart came across a book by George Barker and fell in love with his verse and decided that she was in love with him too.  She started an affair with him, hoping that he would leave his wife, but this never happened.  She had not one, but four children with Barker.  She wrote By Grand Central Station... shortly after the birth of her first child. 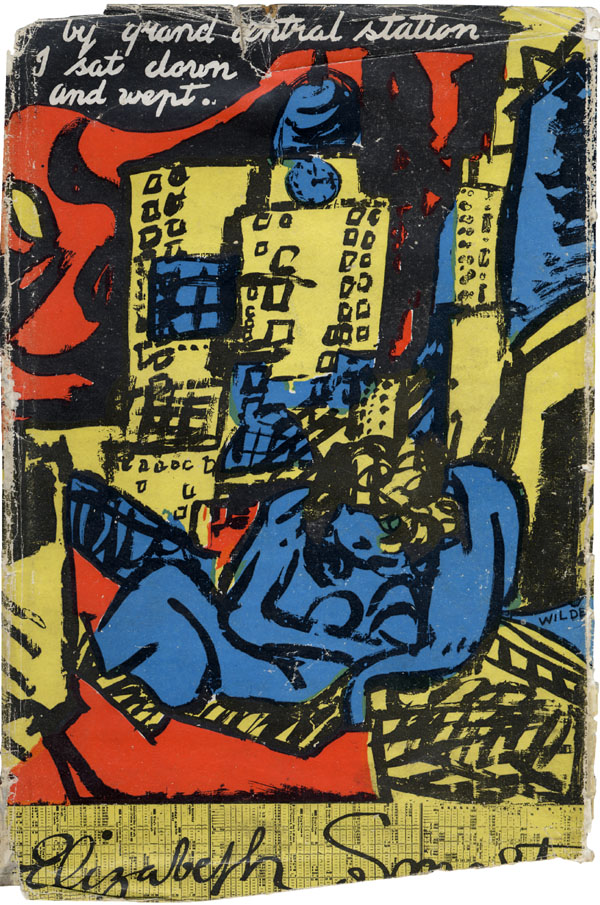 It is pretty much impossible to avoid making some kind of moral judgement about Smart, given this background.  I think she was a terrible fool who didn't care at all about hurting others, but she also seems to have a bit of screw loose, which led to some fairly interesting writing.  She certainly strikes me as an unfit mother, but there doesn't seem to be that much written on her children after the first one.

It is also difficult to separate their literary merit as opposed to the scandal.  I suspect that in the absence of this affair, Elizabeth Smart wouldn't have written anything and George Barker would have been less known.  But as a contemporary Abelard and Heloise they have achieved minor literary immortality.  I actually went through Barker's Collected Poems last year, and to be honest only found 10 or 15 of them of any interest.  I thought he was an extremely minor poet, and certainly not worth all this fuss.  I've never met a poetry groupie in real life, though I know they do exist.  I have encountered poets who thought they were special enough to merit a groupie...

The book is difficult to review.  Not all that much happens in the book other than Smart recounting the ups and downs (mostly downs) of her having an affair with Barker, ultimately leaving her abandoned with a "bun in the oven" (but then apparently couldn't leave well enough alone and kept coming back to her but without making any final break with his wife, although this is all after the events in By Grand Central Station...).   The language is very over the top with lots of references to Old Testament imagery (particularly Song of Songs) and other ecstatic poets like Blake (and more than a few apparent references to John Donne and perhaps even George Herbert).  It's quite unusual in that Smart is operating on two levels at once -- the ecstatic and the real (though mostly in the ecstatic world).  I have no idea if she was this way in real life (though some comments in the book suggest she did with people calling her a religious loony), but she certainly retrospectively portrayed these events in that light.  (It may not be a good metaphor at all, but I sort of see her doing what Stanley Spencer was doing in the visual arts, basically claiming that people on the British Isles should be acting as if Jesus would return at any moment, and yet he also would be painting absolutely contemporary scenes.)


I find it extremely hard to take how Smart tries to justify her actions by claiming that she is in the grasp of an all-encompassing love and that it is self-evident she and Barker are soul-mates (so why won't his wife just release him already).  I wasn't always terribly sympathetic to the various odd things that Barbara Comyns' feckless characters got up to, but they didn't try to justify their behaviour using flowery metaphors that claimed they couldn't help it.  Here's a pretty typical example: "To deny love, and deceive it meanly by pretending that what is unconsummated remains eternal, or that love sublimated reaches highest to heavenly love, is repulsive, as the hypocrite’s face is repulsive when placed too near the truth."

In addition to what appear to be references to Blake, Donne and Herbert, I found something of the obsessive Christopher Smart (probably not a relation) in this work, and maybe some of the extravagant metaphors of Dylan Thomas.  I found this passage somewhat amusing and suitably over the top.  Smart is reflecting on Barker's wife and the damage she is doing to her: "On her mangledness I am spreading my amorous sheets, but who will have any pride in the wedding red, seeping up between the thighs of love which rise like a colossus, but whose issue is only the cold semen of grief?"

The single most brilliant sequence -- which really emphasizes the dualism that Smart embodies/suffers from -- is the opening of Part Four:
But at the Arizona border they stopped us and said Turn Back, and I sat in a little room with barred windows while they typed.
What relation is this man to you? (My beloved is mine and I am his: he feedeth among the lilies.)
How long have you know him? (I am my beloved’s and my beloved is mine: he feedeth among the lilies.)
Did you sleep in the same room? (Behold thou art fair, my love, behold thou art fair: thou hast dove’s eyes.)
In the same bed? (Behold thou art fair, my beloved, yea pleasant, also our bed is green.)
Did intercourse take place? (I sat down under his shadow with great delight and his fruit was sweet to my taste.)

This leads to their arrest for crossing state borders for immoral purposes.  By the most amazing coincidence, there was a recent story about a UBC student who was detained at the US border on suspicion that she was a sex worker, and this remains grounds for denial of entry to the U.S., though the laws against your run-of-the-mill adultery barring admission have been eliminated. Plus ça change...

By Grand Central Station is a very short book (roughly 100 pages), and it is hard to tell how well this style would hold up in a longer narrative. I guess I will find out, as there is sort of a follow-up (much less famous though) called The Assumption of the Rogues & Rascals that was bundled in the copy I borrowed from the library.  That is also about 100 pages, and appears to be written in a slightly less fraught style.  For those looking for more on Elizabeth Smart and her later works, this page is a good starting place.
Posted by Eric P at 6:00 AM