Jane Munro's poetry collection Point No Point ends up throwing the reader for quite a loop.  I'll get to that when I get to discussing the final poem in the collection "Moving to a Colder Climate."

Up to this point, the first batch of poems are generally uplifting vignettes of Munro's remembrances of growing up.  Her father teaches her about life on a camping trip, making sure that she has survival skills.  He is definitely a man's man, but that is what makes sense, living in largely rural areas in B.C.

However, with knowledge of what is to come, there are certainly a few warning signs in the first batch of poems in the collection, particularly when Munro sort of casually mentions that her father owned and lost a boatyard.  But most achingly in the early going in "Missing Person" when she talks about her brother who has essentially become a loner and then vanished off the grid: "Traced to Edmonton and thin air."  This is always the worst case scenario for parents -- that their child will somehow fail to thrive, get into drugs and vanish.  Here, Munro must take on the worry and perhaps even a bit of the guilt (though she doesn't discuss that) as both her parents are dead by this point.  It's a moving but sad poem.

As an aside, the semi-renowned Chicago photographer Art Shay lost his son at a somewhat younger age (than Munro's brother) while he was out more or less hitchhiking his way around the world, trying to find himself, and sadly eventually running into trouble.  It sounds as though this son, Harmon, was simply unlucky and wasn't driven/dragged down by the internal demons that haunt Munro's brother.  I'm not sure that makes the pain any less, however.  I always break up when I see this image of Harmon in the snow at age 6 or so.  I guess I didn't mean to sidetrack this review,* but it is such a beautiful and heart-breaking image. 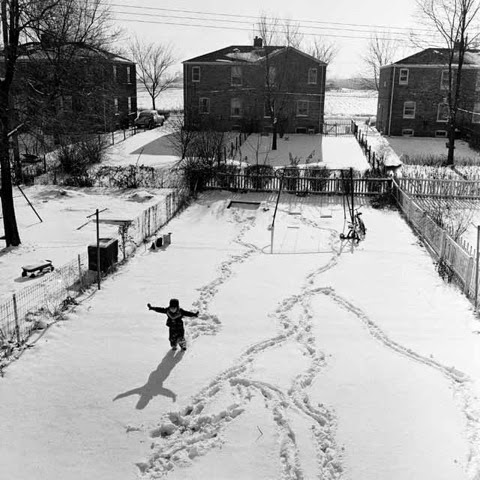 The poems after this sort of return to a more chronological order, going to Munro's young adulthood when apparently she moved to San Francisco.  The poem "Midsummer, After Watching Bullitt" is a catalog of what life was like back in simpler days: "everyone / was thin then, before pasta became popular, living on grapefruit and hard-boiled eggs and celery sticks stuffed with Velveeta..."  She recalls other aspects of being poor, like cockroaches in the kitchen and having to sleep on a hide-a-bed in tiny apartments.

Certainly some of her dissatisfaction stems from how the world turned out.  The hippies eventually became middle class and voted for Reagan (or Mulroney).  "we didn't guess the Selma March would fade, or that McDonald's would spawn millions / the sixties seemed so full -- we didn't imagine always being in a rush, or how our lives would grow more labyrinthine..."  But it seems clear she would pretty much drop anything to go back to those days before being burdened with the full weight of adult responsibilities.  I know I would.  Anyway, this is one of the poems from the collection that really speaks to me.

I also like "Intercourse," though this seems to be tied to economic ties and nothing more intimate.  It's actually a poem about a freight train and freight transport more generally, which then leads her into a reverie of her own train travel, including a train ride through Quebec.  "Transports / tying a country together. / The slow strip of a whistle uncovers / longing ... / ... The way I longed to / speak French after a trip to Percé. Riding a little train / across the Gaspé..."

The next section of the collection seems to delve into her middle aged life.  In the title poem "Point No Point," she discusses the whole move from the city (presumably Vancouver) to Vancouver Island.  "We left the city, moving to this coast and its colder climate when I turned fifty and wanted to change my life.  What was I expecting?"

What she finds is a more immediate connection with nature as she walks down her driveway into the trails that lead to Point No Point.  "Out on the point, cormorants and gulls queue in the gale and stare across the strait at the Olympics.  A trawler gurgles by.  I think of the smell of coffee and diesel as I step carefully on wet rock, the swell and dip of the deck."  This poem is growing on me.  It and a few others in this collection put me in mind of the Vermont poet David Budbill.  If I ever manage to publish the transportation poetry anthology, I think I would try to include this in the nature walks section, even though it is a bit of a stretch.

I also like "Morning with Cats" where Munro describes how the morning is so magical, mostly because of a very thick fog that has settled around her house, that she decides not to split wood or light the furnace but to put on Mahler's Fourth and watch the cats.  "Fog coats the windows with seed pearls.  Music loves / the kitchen's plain details.  I watch one cat drink rapidly. / We eat a little. What a lush romance to have a life."  There is something almost meditative in this poem and a few others in this section.  This is a strand of her poetry that becomes stronger in the next collections, but I'll get to them in due course.

The final section contains only a single, long poem, "Moving to a Colder Climate."  This ends up seeming very much like Sharon Olds and her confessional poetry, particularly where she delves into her childhood and how her dealings with her parents were fraught with a lot of anxiety and anger.  However, she still was deeply affected by their deaths and found that she loved them despite everything.  Indeed, "Moving to a Colder Climate" does remind me in certain sections of Olds' The Father generally and "The Race" specifically.

What we find out is that her father had some incredibly bad luck.  His business partner in the boatyard apparently embezzled or something, and that was a large part of the reason he had to give that up and become a hired hand of sorts.  Her father built a house for himself and Munro's mother, but it caught fire and her mother (foolishly) went back in for something and died in the flames.  As one might imagine, he was never quite the same.  At the same time, Munro does not shy away from indicating how chauvinist he was towards her, particularly when she was growing up, and what a control freak he was about all kinds of things, including what books she checked out from the library.

He'd urge, To thine own self be true,
then swear, I will make a woman of you,
by which he meant
pleasant, conventional, deferential,
decorative. ...

He also had some strictures about how mothers must subordinate themselves to their children.  And was quite racist towards one of Munro's non-white boyfriends (perhaps the one with whom she lived in San Francisco).  Munro tries to keep both sides in balance as she evaluates the influence he had over her, which was quite immense to the point that he reappears as a ghost in the living room.

I hadn't really expected such a complicated picture of her father from the poems in the first section which suggested she had a fairly conventional childhood, though in "Moving to a Colder Climate" she really lets quite a bit hang out.  Still not quite to the extent that Sharon Olds does, however.  What is somewhat intriguing is that Munro seems to retreat from confessional poet mode in her subsequent collections, so this might have been the last she really had to say on the subject of her complex father.  It's certainly an interesting poem, but I do like the first two sections of the collection more.

* Edit: While I don't want to SPOIL it, the plot of Jon Robin Baitz's Other Desert Cities involves the loss of a brother, and one could definitely say that his unwillingness to live a conventional life led to a pretty bleak fate.
Posted by Eric P at 1:48 AM