Somewhat curiously, I've been reading quite a few collections by senior poets, that is to say poetry collections by poets who have reached retirement age.  I've just started working through quite a few of Philip Levine's later volumes, and I've also read (though not yet reviewed) Jane Munro's last two collections.  I decided that it might be best to officially close out the challenge with Margaret Atwood, but I am reviewing her poetry and not one of her novels.

As it happens, Morning in the Burned House is not even her latest collection, which is The Door (from 2007).  I'll be reviewing The Door next month.  As I was working my way through Morning in the Burned House, I had a sense that I had read at least a few of these before.  Indeed, it turns out that the entire collection is published as the last section of Eating Fire (which also contains two volumes of selected poems, so it is an incredible bargain, or at least my copy was -- though I kind of prefer the newer edition's cover, even if it is a bit too literal). 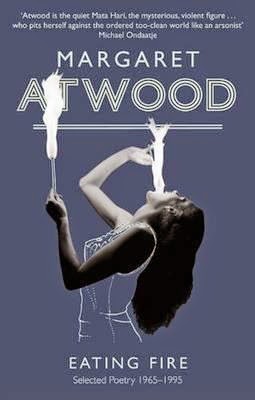 I wouldn't say I prefer Atwood's poetry to her novels, as she has many pleasures that only become apparent when she is writing layered fiction.  However, she can be quite good when forced to be concise.  Or at least reasonably concise.  Many of these poems are two or three pages in length, so they are not short, pithy poems.

The collection is broken into 5 sections.  The first is made up of primarily autobiographical poems (where the authorial voice does seem to square with what we know of Margaret Atwood).  The second section is mostly comprised of poems about women from history, particularly those that got a raw deal.  I wonder if The Penelopiad (first a novella from 2005 and then turned into an effective play) stemmed from the work she did researching and writing these poems.  The third is a bit of a mix, a bit more personal but still some political poems, particularly "Half-Hanged Mary," a long sequence of poems about a "witch" from Massachusetts.  She almost seems to be channeling Adrienne Rich in this particular section.  The fourth section is primarily about her (quite) elderly father and is vaguely reminiscent of Sharon Olds or indeed Jane Munro writing about their fathers, but with far less conflicted feelings.  (Atwood seemed to have a much happier childhood than either of them.) The final section is, like the third, hard to categorize, though the poems seem to be drawn from dreams and/or have a mythic quality to them.  I would say my favourite sections were the 1st and 4th, though there are good poems, or at least interesting stanzas and lines, throughout the collection.

I'll just touch on a few that worked for me.

While she comes across just a bit heavy-handed in "In the Secular Night" (she is well-known as a humanist and fierce agnostic*), the last lines work:
Several hundred years ago
this could have been mysticism
or heresy.  It isn't now.
Outside there are sirens.
Someone's been run over.
The century grinds on.

Perhaps it is fitting that my favourite poem was "February," which features her cat:
...  In the pewter mornings, the cat,
a black fur sausage with yellow
Houdini eyes, jumps on the bed and tries
to get onto my head.  It's his
way of telling whether or not I'm dead.
...
February, month of despair,
with a skewered heart in the centre.
I think dire thoughts, and lust for French fries
with a splash of vinegar.
Cat, enough of your greedy whining
and your small pink bumhole.
Off my face! You're the life principle,
more or less, so get going
on a little optimism around here. ...

This has indeed been a particularly brutal February (one of the coldest on record though not all that much snow), and I am also thinking dark and dire thoughts.  As it happens, I am starting to think about pets now that we will own our own place soon, and the kids are just about old enough to help take care of them.  We'll see how that works out.

Of the poems in the second section, I think I am most attuned to "Helen of Troy Does Counter Dancing," where the somewhat incongruous nature of a Greek legend brought into the modern world reminds me more than a little of Steven Sherrill's The Minotaur Takes a Cigarette Break.
The world is full of women
who'd tell me I should be ashamed of myself
if they had the chance.  Quit dancing.
Get some self-respect
and a day job.
...
Selling gloves, or something.
Instead of what I do sell.
You have to have talent
to peddle a thing so nebulous...

From the third section, "Half-Hanged Mary" is apparently about a women accused of witchcraft who was hung from a tree but survived.  It is a bit too long, but I thought the very final stanza was well crafted and a bit eerie:
The words boil out of me,
coil after coil of sinuous possibility.
The cosmos unravels from my mouth,
all fullness, all vacancy.

The final poem from this section "A Pink Hotel in California" features Atwood remembering her father chopping wood while they were staying in the woods in 1943 (this seems to be basically the parts of her past that fed into Cat's Eye).  Now (in 1994) she is in a pink hotel in California (perhaps on a book tour?) and her past comes flooding back to her.

This nicely sets up the fourth section where the poems discuss caring for an aging father, who is at times a bit cranky and unpredictable and even a bit Lear-like ("King Lear in Respite Care").  Perhaps not surprisingly, Atwood's poems evince a powerful desire to rewind time and to restore her father to his glory days, even if that means she has to return to childhood.

She is honest enough to admit she was bored a great deal in her youth ("Bored") and that "I could hardly wait to get / the hell out of there to / anywhere else."  But knowing what she knows now, she would gladly go back to that time when her father was still a youngish, vigorous man and appreciate it for what it was.  I guess this is a fairly standard trope coming from poets past their own middle age, but it is still a useful reminder.

It's hard to pick any particular poem out from the last section as they all have a bit of the spectre of doom hanging over them, as so many dreams do.  Even when the dreams start out reasonably upbeat, there is always the chance that things will quickly take a turn for the worse.

I did like this section in the middle of "Shapechangers in Winter":
Every cell
in our bodies has renewed itself
so many times since then, there's
not much left, my love,
of the originals.  We're footprints
becoming limestone, or think of it
as coal becoming diamond. Less
flexible, but more condensed...

I think this is a solid collection with "February" being a stand-out poem.  Given that there are a few days left in February (and early March looks to be just as cold), it is worth reading this and trying to take some solace in the fact that others are suffering just as much.  As it happens, the entire poem is on-line here for your reading pleasure.

* I find myself in basic agreement with Atwood here.  She is too polite (most of the time) to come right out and say it, but she considers the idea of a personal God that pays attention to the human race (or specific tribes or favoured individuals) as arrant nonsense.  At the same time, to claim with absolute certainty that there is no possible way that an impersonal force or prime mover might have kick-started the universe is dogmatic and close-minded in its own right.
Posted by Eric P at 7:35 AM