I did manage to read Carol Shields's Unless in November, which seemed appropriate (the events basically took place between Oct. and Dec.), though obviously I didn't quite manage to write my review in the same month.  Unless is a book that has held some interest for me for a while, as I have a bit of a morbid interest in works of art that are the last ones finished by a writer, playwright or artist, and this is especially true if the artist was generally aware that they were racing death to the finish line.  My understanding is that Shields was aware she had only a short time left to live while she was writing Unless (during a bit of a remission from the cancer that ultimately killed her).  What I was not aware of is that she ultimately attempted to write one more novel after Unless.  This is discussed at some length in this post, which talks a bit about Shields's plans for the novel and the short story "Segue," which was ultimately salvaged from her working draft of this novel.  "Segue" is included in Collected Stories.  I'll be reviewing the rest of the stories in a separate post, but I will add a few of my own thoughts on "Segue" at the end of this post, after I discuss Unless.

Shields is generally known as a feminist writer who often focuses on telling the story of a fairly unremarkable woman (esp. in the case of The Stone Diaries), making the point that it is not only famous and/or successful men that deserve novels written about them.  The downside is that there is often not as much plot.  There is some plot in Unless, though it is very much a domestic drama.  In some ways, this reminded me of an Anne Tyler novel.

In any case, I had wondered what would be sufficiently distracting for someone facing death, and I think Shields's answer is to dwell on a child who is in peril.  I suppose for many of us that is true -- about the only thing more upsetting than our own mortality is fearing that our children will die first.

I will try not to SPOIL the actual ending, but I can't discuss the book without going into what is wrong with Reta's life is that her oldest daughter, Norah, was going to U of T (and living with her first serious boyfriend) and then she abruptly decides to ditch everything (school, boyfriend, house) and camp out on the corner of Bloor and Bathurst, right near Honest Ed's, with a big sign reading GOODNESS.  She passively accepts whatever passersby give her, though she shares this with the residents of the shelter where she stays at night.  She is clearly having a breakdown of some sort, but it takes quite a while to understand why and whether she can recover from this.  What's sort of interesting about the novel is that based on feedback from social workers, Reta only checks in with her daughter once a week or so and the rest of the time carries on with her interactions with friends as well as carrying on with work.

I should take a minute to memorialize Honest Ed's, which will be closing down at the end of this month.  It really does feel like the end of an era.  While I never really bought that much in the place (though I did pick up a fair bit of cloth from Fabricland), I will miss it.  I really ought to try to take my family there at least once. 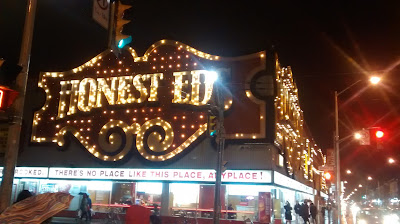 I'm not quite sure how long it will last, but the TTC collaborated with some of the Honest Ed's staff to decorate the Bathurst station just like Honest Ed's, even with some corny jokes and puns.  It's done quite well actually. 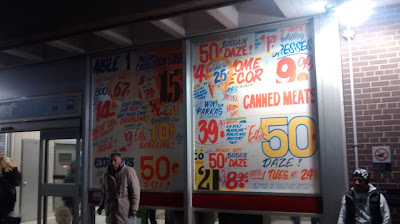 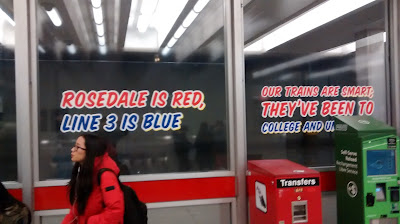 Back to Shields's novel, Reta has a somewhat accidental career as a translator, but she also wrote a minor hit novel and decides that the best thing to do to distract her from her woes is to write a sequel.  She has unexpected trouble from a new editor, who does a fair bit of mansplaining to her.

One of the more intriguing aspects of the novel is that Reta writes a fair number of letters to public figures, mostly academics, complaining how women have been marginalized in the university as well as in literature, and she thinks this is partly causing her daughter to withdraw from the world.  (Unlike Bellow's character Herzog, she only mails off one of these missives.)  My impression is that Shields does deeply believe in what Reta is writing, but she may actually be hinting that feminist theory (or rather dogma) is not actually helping her to navigate her troubles and may be blinding her to what is really wrong with her daughter.  (This was my view anyway.  In fact, at one point, Reta says that Norah says she is hearing voices, and Reta interprets this as the way women internalize social pressure as a running commentary in their head.  I was thinking this might actually be a serious warning that Norah was developing schizophrenia and was more than a little annoyed at Reta and her feminist preoccupations at this point.  Fortunately, Norah is not schizophrenic, though it is her father who is closer to the right track as to what is actually wrong with her.)

In general the stakes do feel higher here than in The Stone Diaries, and I suspect that is why I like it a bit better.  However, it is like The Stone Diaries in that much of the novel focuses on relationships -- and how women are cast as supporting characters to men, even in their own lives!  While relationships between women may be somewhat less fraught than those between men and women, there is still plenty of room for misunderstanding (sometimes explicitly because it is hard to determine who is "the dominant one" in the relationship).  It is somewhat interesting that Reta's visit with an old friend who moved away from Toronto was extracted into a stand-alone story "A Scarf," which is in Collected Stories.

I suppose that is an appropriate segue to "Segue."  I won't go into too much detail as the article I linked to above explains the characters.  The story really doesn't do much beyond introduce the characters.  It is very hard to decide where Shields would have gone with this story.  The narrator seems to be shedding responsibility and is more or less retiring (though whether a poet can actually "retire" is an open question).  She seems fairly content in her marriage, so it is unclear why the story ends with her claiming that she isn't happy.  The "particular circumstances" that don't allow her to be happy could of course be related to her unhappiness around her aging body, or it might be some domestic issue that Shields never got around to detailing.  So it is definitely a cliff-hanger that will not be resolved.  Actually, if one delves into her working notes for the unfinished novel, it does seem to be mostly a medical issue.  (A previous draft said that she was happy "until [her] diagnosis.")  What apparently comes through more in the unpublished fragments (and not as much in "Segue" itself) is that the novel was going to touch on 9/11 indirectly and the Gulf War fairly directly (or at least the narrator's reflections on the Gulf War).  So there is sort of a ghost novel that emanates from the published story.  I am certainly sorry that Shields didn't have the time or energy to finish it, as it might have been quite interesting and a bit different from her other work.

In closing, I would encourage people to seek out "Segue" in Collected Stories.  If you have a copy of that, you might as well read "A Scarf," which will give you a strong sense of whether you would enjoy Unless.
Posted by Eric P at 12:11 PM