I thought I would manage to read Steve Zipp's Yellowknife towards the end of the 9th Canadian Challenge, but in the end I spent that time with Alice Munro and Margaret Atwood.  Yellowknife is a novel set in Yellowknife (obviously) from roughly the late summer of 1998 to late spring (?) 2000.  It is set in Yellowknife, NWT.  It sort of emphasizes the weirdness of the city, as well as how a fair portion of the city's economy is based around resource extraction, particularly mining (apparently diamonds were discovered in the Northwest Territories in the early 1990s, but diamond mining didn't really begin until 2003 (see this piece on the Diavik Diamond Mine), so Zipp has telescoped events a bit in the novel).  Also, the diamond mines are hundreds of kilometers away from Yellowknife proper, so I am not sure gangs would really move into the city of Yellowknife to try to muscle in on the action.  In a similar vein of exaggeration, I assume Yellowknife doesn't have underground tunnels all under the city, connecting to the gold mines.  It is very much an ensemble novel, so a large cast of characters come in and out of focus throughout, and indeed several of the characters that the reader probably considers the "main" characters actually leave Yellowknife.

These two reviews capture pretty well what reading the novel is like: here and here.  I've never been to Yellowknife (the further north I've made it is Edmonton!).  I wouldn't say this novel has really inspired me to go, but perhaps some day I will try to get up that way, particularly during one of the periods where the Northern Lights are likely to be seen.  I'm more likely to head north kind of gradually, perhaps starting with James Bay and then a bit further north up to Hudson Bay.

I did find it appropriate that I started the novel in the late autumn, and the first few chapters introduce us to Danny, who is a restless soul who comes to Yellowknife in search of a bit of adventure and perhaps a job.  He comes to Yellowknife before the chill sets in, and he has to find a way to survive the winter (fortunately, he gets a house-sitting gig).  Then as I got a bit deeper into the novel, the cold really set in (nothing like a typical Yellowknife winter, but still quite frigid -- on rare occasions Toronto actually can be colder than Yellowknife!)  A couple of days I was reading on the 72B, which actually runs all the way south on Pape/Carlaw, then along Commissioners and finally dropping riders off near Union Station.  (It's sort of a slow and bumpy approximation of the path the Downtown Relief Line would take; it's actually a bit faster to get out at Front St. (near the Hockey Hall of Fame) and walk to Union Station.)  Anyway, this stretch along Commissioners seems to be from a much smaller city, perhaps akin to Yellowknife (though as I said, I've never actually been).  So that helped put me in the mood to finish the novel. 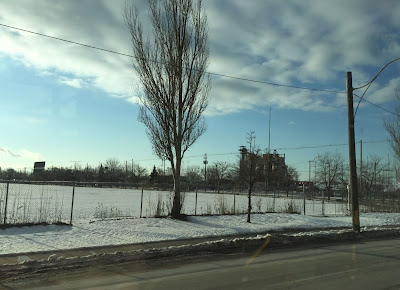 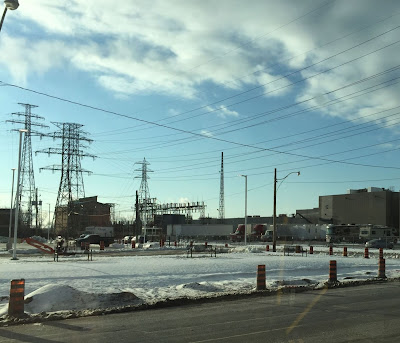 I think it is a little difficult to care deeply about the characters, since the narrative never spends much time with any of them.  Essentially all the characters have some hustle going on, though some are more successful than others.

One of the subplots is that one of these hustlers wants to set up a tourist attraction where the tourists would pretend to search out the remains of the Franklin expedition.  This never really gets off the ground, and indeed the business man, Jack Wool, realizes that if the lost ships are ever found, it will be fatal to this business venture.  Given he doesn't have a lot of luck, if Zipp ever decides to write a sequel to Yellowknife, he should set in 2014 or so, with Jack opening his resort, right before the first of the ships was located (in Nunavut incidentally).  This was actually pretty big news here in Canada, since Stephen Harper was kind of obsessed with the Franklin expedition and was positively gleeful when the first ship was discovered on his watch.  One of the more fantastical elements of the novel crops up here with Zipp sort of suggesting this old dog and a wretched waiter are actually survivors of the Franklin expedition, and elsewhere he suggests that one of the older characters in the novel, Jonah, is well over 100 years old and still going strong.

As long as you don't care too much about individual characters and what happens to them, Yellowknife is an enjoyable ride.  One of the recurring jokes is that, because the Government of the Northwest Territories is getting ready to get cut (due to the splitting away of Nunvat which occurred in 1999), there is constant downsizing at the Wildlife Bureau and eventually the remaining biologists end up more or less hiding out in an office in the basement of the Carboniferous Building, trying not to get laid off or, worse, assigned to some remote territory.  At the very end of the novel, we get some interesting new insights into Pfang, who is brought in as a computer expert by the new boss, but rarely is seen to do any work.  It is a bit too little, too late though, in terms of having to rethink Pfang as a character.  Only one of these scientists, Nora, is really described in enough detail for us to care about her fate.  There is a strange set piece in the middle of the novel where Nora, somewhat akin to Alice in Wonderland, goes off and explores some of the underground tunnels that branch off from this basement office.

Zipp shows no serious concern for his characters, and the novel occasionally has a bit of a slapstick feel to it.  Two of the characters end up sinking in frigid waters and are essentially reborn (sort of like the Egyptian god Osiris or the Fisher King in some versions of the legend).  I personally thought one rescue was enough, though Zipp apparently wanted to leave the novel open-ended and not to end on a really sour note.  I will say I felt the final chapter, in which the reader is taken inside the mind of a large, ancient dog, was probably a mistake.

Whether it was a conscious decision on Zipp's part, I thought there were some interesting parallels to some of Robert Kroetsch's work, particularly the novels that had aspects of magic realism to them.  In Gone Indian, Kroetsch has a character head north and take on a new identity (the second part is somewhat akin to the transformation than Hugo undergoes).  Also, Gone Indian has an interesting set piece at a winter festival as does Yellowknife.  Zipp also introduces Father Brown who usually wipes out the truckers in poker games at rest stops along the winter roads.  It isn't quite the same as the ever-lasting poker game from What the Crow Said, but there are a few echoes.  Also, Freddie, one of the characters that becomes more prominent in the second part of the novel, was apparently raised by ravens, and ravens still do him favors and are presumably acting as spirit guides for him.

Note that it is actually difficult to order a copy of Yellowknife at Amazon, but it is in several Canadian libraries.  The publisher's website is here, and most likely you can still download a copy of the novel.
Posted by Eric P at 5:22 AM