Not having grown up in Canada, I was not exposed to Dennis Lee and his poems for children, such as Alligator Pie (though I fairly recently heard about them due to the Soulpepper show aimed at children).  It was a recent Toronto Star article discussing Lee's upcoming collected poems Heart Residence that convinced me that Lee was an important figure in Toronto's literary history (not least because he was a co-founder of House of Anansi Press) and that I really ought to check out this collection.  (And indeed I have Heart Residence on hold at the library, and I expect to be able to read and review this later in May.)  The article also mentioned Lee's connection to Rochdale College, and perhaps by coincidence the Star had a fascinating article on Rochdale just a day or two before.  I had no idea that I lived right around the corner from Rochdale in the mid 1990s, though the co-op had been closed down in 1975 with the residents evicted.  It served as senior housing by the time I lived down the street, and I did a lot of shopping at the grocery store that was on the first floor (perhaps this was actually one building over from Rochdale). 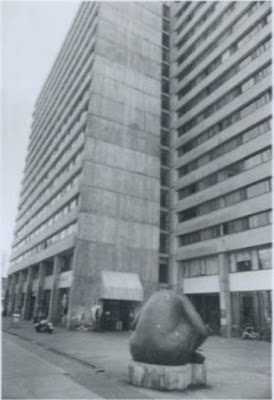 While this is a digression, the poems in Civil Elegies are very much focused on Toronto and how the city should serve its residents (particularly the somewhat marginalized, i.e. youth and students and artists and seniors).  Civil Elegies came out in 1968 (when Rochdale was just getting started along with Anansi Press), but I suspect even then Lee was suspicious that the good times wouldn't last.

I like the cover of the reissued Civil Elegies with its focus on City Hall and Nathan Phillips Square. 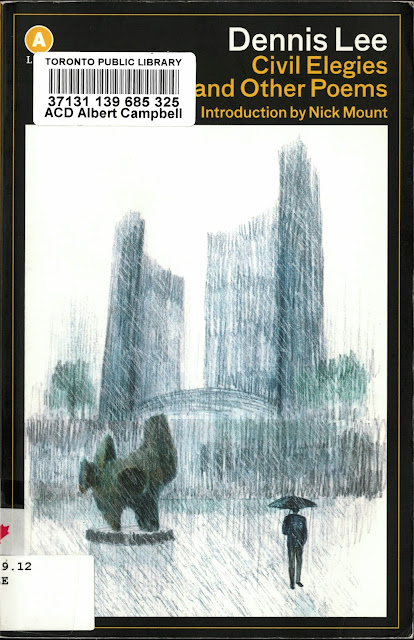 There was a lot of urban redevelopment to make this urban civic space (basically wiping out The Ward, which was essentially Toronto's first slum).  The new City Hall opened in 1965, and it must have seemed incredibly futuristic at the time.  I'm still a big fan of Nathan Phillips Square and have seen some nice concerts there (including Joshua Redman back before he became quite so famous) and even The Flaming Lips!  I'm not good enough at skating to skate there during the winter unfortunately, and I've also kind of given up going there for fireworks displays, since the crowd control is pretty dicey. 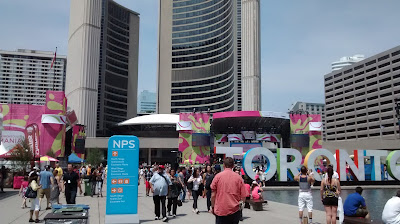 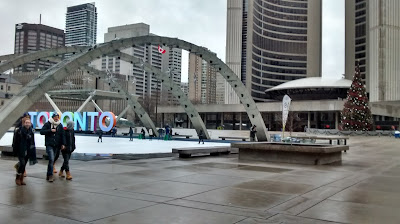 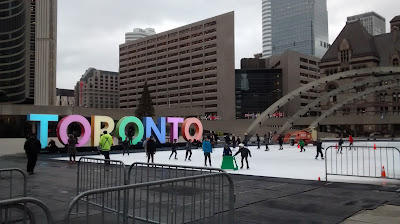 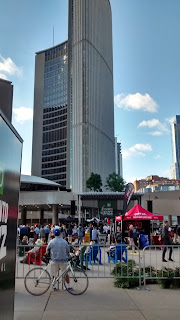 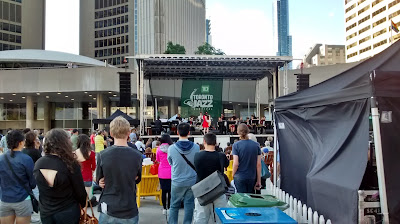 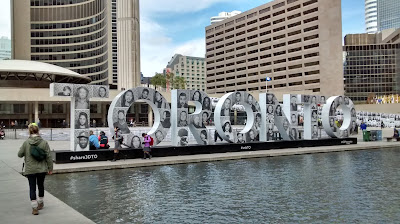 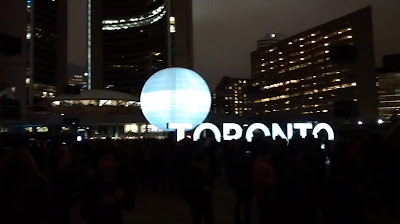 I must have a picture somewhere of the entire city hall, but normally I am focused more on the activities in the Square itself (including art installations).  The first photo in the sequence comes the closest to capturing all of City Hall, whereas the second photo does include the Henry Moore sculpture The Archer (though it is very small).  In the other photos there are too many other people in the way.  This is in complete contrast to the cover of Civil Elegies which prominently features the sculpture, but the plaza is otherwise empty aside from one lonely citizen.  (While there is something to be said for the alienated artist, alone even in the midst of a bustling city, I definitely appreciate that in reality crowds continue to come out for all kinds of civic events and that Nathan Phillips Square is a well-used space.)

And finally I suppose I should actually review the poems in the book...

The introduction in the reissued edition (2012) is helpful, since it points out that between 1968 and 1971, Lee revisited and revised Civil Elegies, adding two new elegies (2 and 4) and modifying some of the others.  Apparently, Margaret Atwood helped him re-edit the poem!  In the space of only 3 years, the mood had gotten more somber, as Lee felt Rochdale was already on its way to failure, and in general whatever had been left of the spirit of the 60s (the high of Expo '67 for example) was being crushed.  In addition to the changes to Civil Elegies, 16 new, separate poems were added to the front of the book.  In Heart Residence, these stand-alone poems have been relocated towards the back of the book into a section titled "Not Abstract Harmonies But."

Despite Lee's more recent efforts to put some space between them and Civil Elegies, I will still review them here.  Of the 16, my favourite is "400: Coming Home," which may in fact be the only poem I am aware of that sort of celebrates Toronto's 400-series highways: "You are on the highway, there is a kind of / laughter, the cars pound / south  ... And you are still on the highway. There are no / houses, no farms. Across the median, past the swish and thud of the / northbound cars, beyond the opposite fences, / the fields, the / climbing escarpment ..."  The poem seems almost a dream where no matter how far one drives, one is still on the highway.  (I suppose the only difference is that in the late 1960s, one would actually be driving all this time, whereas one might well be stuck in traffic in the 2000s.)

Roughly half of these first 16 poems seem to be about the domestic arrangements of the poems' narrator (which may or may not be Lee).  While there are some hints that whatever issues he and his wife are having, they can partly be attributed to city living and or living through a period of war (Toronto had become quite a haven for Vietnam War resisters, though perhaps not quite to the same level as Vancouver).  I do prefer the poems that are more directly about the city, such as the poems about High Park or Sibelius Park.

I have never actually visited Sibelius Park, since anytime I exit the subway at Spadina, I stay on Bloor or head south.  I'll have to check it out one of these days.  "Sibelius Park" is a poem where the poet seems to be questioning his purpose: "and behind him, five blocks south, his other lives / in rainy limbo till tomorrow: / Rochdale, yes   Anasi / the fine iconic books, sheepish errata / shitwork in a cold basement, moody / triumphs of the mind".  He is sort of trudging along with these (largely mental) burdens.  The park offers a refuge and a kind of renewal: "And then Sibelius Park! / The grass is wet, it / gleams, across the park's wide / vista the lanes of ornamental / shrub come breathing and the sun has filled the / rinsed air till the green goes luminous and it does it / does, it comes clear!"

I've read "Civil Elegies" a couple of times now, and it really is quite an ambitious poem.  I may simply be unaware of a comparable poem that tries to tackle Toronto's complexity, whereas I can think of book-length poems by George Bowering, Daphne Marlatt, W.H. New, Meredith Quartermain, and George Stanley that cover Vancouver.  Of course, if I have missed any major Toronto poems, do leave a comment below.

Civil Elegies opens with Lee (or rather the poem's narrator) sitting in Nathan Phillips Square, in the heart of old Toronto.  Lee is probably intentionally drawing comparison's to Eliot's The Waste Land when he writes: " Therefore the spectres arrive, congregating / in bitter droves, thick in the April sunlight, / accusing us and we are no different, though you would not expect / the furies assembled in hogtown and ring me round, invisible, demanding / what time of our lives we wait for till we shall start to be."

Some themes that arise from time to time in Civil Elegies is the complicated history of Canada, particularly how the land was taken from Natives, and how Americans (though not really the draft-dodgers) threaten to take over the city.  Elegy 3 contrasts the sleepy complacency of lunchtime workers "and the people come and they feel no consternation, dozing at / lunchtime; even the towers comply" with the fact that the city is built on stolen land.  He seems to be griping a bit at the name of the Henry Moore sculpture (which isn't technically called The Archer at all): "that [greedy] people will botch its cities, its greatest squares / will mock its money and stature, and prising wide / a civil space to live in, by the grace of its own invention it will / fill that space with the artifacts of death."

I have to say this section (Elegy 3) is a bit overwrought and reminds me more than a little of William Kurelek and his view on what made Toronto a false city upon the hill and indeed one that would be wiped away either by God or war, but in either case the city would be purified by fire.


While Kurelek and Lee would surely not agree on what was wrong with the city, they both had that zeal and fervour, which so often leads to uncompromising posturing (political or religious) and, indeed, sometimes armed conflict.  I doubt very much Lee would ever have taken it that far (and in the interview he does say he was still fairly square, though he interacted with plenty of radicals through his time at Rochdale).

Lee continues a bit in this vein in Elegy 5 where he worries that our attachment to children (and more broadly to our personal needs and comfort) does blind citizens to all the misdeeds that politicians do in our name.  (It is hardly surprising that within a few pages, he calls out the Canadian politicians who did not attempt to do more to halt the Vietnam War.)  It is a fairly uncompromising (and unrealistic) stance from a leftist perspective.  I would say it does undermine the poem in some ways, but it mostly just shows that Civil Elegies was very much rooted in its era.  In some ways, it is impressive that certain passages still hold up and have a certain grandeur to them: "once in summer looking up I saw the noxious cloud suspended / taut above the city, clenched, as now everywhere it is the / imperial way of life that bestows its fallout."

Elegies 6 through 8 continue along these lines with Lee railing against the need to compromise one's principles to live a comfortable life in the West.  Modern life cannot easily stand such scrutiny, and yet few are willing to truly follow their principles and become martyrs (or even just social outcasts).  In Elegy 8, Lee starts winding down with a return to the public square, training his attention on the crowds who are less conflicted (or less obviously conflicted) than he: "caught once more in the square's great hush with the shoppers, / hippies, brokers, children, old men dozing alone by the pool and waiting, / feeling the pulse in the bodies jostling past me driving to climax and dollars and blood, / making my cry here quick and obscure among many in transit".

The final Elegy begins with the plaza emptying out: "The last few tourists pose by the Moore and snap their proof that they too were alive. / ... / Across the square the crisp leaves blow in gusts, tracing / the wind's indignant lift in corners, / filling the empty pool."

This leads to a weird discussion of the void (apparently since the modern life can have no inherent meaning and the contradictions of life in capitalist society cannot be squared) and how acceptance of this void may come to supplant religion.  For what appears to be on the surface, a fairly nihilistic position, God (even if denied) certainly turns up a lot in this elegy.  It is also possible that Lee is flirting with Zen here: "We enter void when void no longer exists."

Politics aside, this is a very complicated and rich poem, which I intend to return to from time to time.  It has generated a few academic articles (here and here and here) and an entire monograph by Robert Lecker written about the poem!  And yet it doesn't seem particularly well known, perhaps because Dennis Lee's poems for children have so overshadowed his poetry for adults.  It is possible that Heart Residence will change that, and I will return to this issue in that forthcoming review.
Posted by Eric P at 5:10 AM