I wasn't entirely sure whether If Borderlands, the collected poems by Elise Partridge, should count towards the challenge.  Partridge was an American, though she moved with her husband to Vancouver in 1992 (itself an interesting date, which implies it was not a political move but probably one done based on her husband's work, which she actually confirmed in an interview -- the interview itself is quite good on her thoughts on publishing poems that had such intimate details about her illness).  Partridge only lived 15 or so years in Canada, before dying from a remission of cancer, but all 3 of her individual poetry collections were published in Canada and she became a dual citizen, so it would be quite begrudging not to include her.  In fact, she became quite a mainstay of the Vancouver literary community (although she had other admirers, including Robert Pinsky), and there was quite an outpouring of grief when she died in 2015.  (Indeed, it was particularly sad that Partridge did not live long enough to see the publication of her third book, The Exiles' Gallery, which came out on House of Anansi Press.)

Somewhat unusually for a 20th Century poet, most of the poems, particularly in the first two books (Fielder's Choice and Chameleon Hours), follow the more formal rules of poetry, i.e. the lines are generally metrically even and there is usually a rhyme scheme.  She includes poems with ABAB scheme and couplets (like "Temp").  In this she seems to be following in the footsteps of early Marianne Moore or very early Adrienne Rich, though Partridge seems to have been modelling herself on Keats, at least a little bit.  She also writes slightly looser poems where the stanza is 5 or 6 lines long but the first and last line of the stanza rhymes (I didn't check to see if the inner lines rhyme across the stanzas, but they may have).  I have to admit, it is very difficult for me to read formalist poetry written post 1960.  It just somehow feels wrong, after the vast majority of poets abandoned this approach.  It's my own hang-up to be sure, but it did mean that I sort of glossed over many of her earlier poems.

That said, I thought "Temp" had some brilliant couplets .  The temp is here riding the elevator (not into the sky but just to her desk): "She watched the gleaming silver doors / parting to show identical floors / painted a flat oyster white, / pebble-gray rugs, fluorescent light. / A briefcase and two suits stepped off. / Pinstriped shoulders; stifled cough..."  After a day spent filling in, answering phones, making copies, filing, etc., things start winding down: "3:25, back at her station, / she double-checked the pagination / of reports that had to be couriered / by 4 p.m.; retyped a word;" (she is approaching Byron's Don Juan levels of stretch here...).  It is possible that my empathy with the temp, uncertain who will be friendly or not on a week by week basis, has colored my perception of the poem, but it was one of my favorites.  My temp days are long over (and generally jobs for secretaries and assistants are being reduced as office workers are all expected to "type" up their own reports and make their own copies and file them if necessary, so the temp market has presumably shrunk quite a lot), but this did bring up memories.

It is probably not that surprising that, as Partridge was a poet who wrote about her own medical procedures and the struggles of other cancer survivors (and who died relatively young from cancer), most reviews focus on this aspect of her work (see here and here).  I'll basically be following in this same tradition, since these poems do seem to be the most compelling and have the most urgency.  (What may be a bit more surprising is that no one seems to have linked Partridge with Audre Lorde who had a long struggle with cancer.  Perhaps this is because The Cancer Journals was a non-fiction memoir and Lorde's poems were more generally devoted to social justice issues.)

The chemo also affects her vision "Gnats in dervish clouds, / indistinguishable, words fizzle / Or keep fading in and / out of focus--" and she worries that she may never fully recover her eyesight: "So many small things I still want to see / sheen of my nephew's corner eyelash, / snowflake circuitry, fleas' thighs, / ... / the peaks and valleys of each mustard seed."

Even in the poems not directly about cancer often have quite a melancholic air, and some explicitly focus on the pangs one faces when considering the "path not taken."  In "Childless," she frets that her genetic legacy has terminated: "Helixes snapped like crepe-paper streamers, / our DNA ladder / sways with frayed ends, an idle last rung. / No filaments spiraling us to the future..."  She then moves into more sociological territory, positing that those couples without children are not valued by society.  There is probably some truth to this, but certainly less than there used to be.  Anyway, her comments are fairly cutting: "Minor characters from a serial novel, / we turn out of sight down a boulevard / hand in hand, at the end of Book Three."  This theme returns in "Gifts" where she wonders what she will leave behind after death: "I leave / nothing of enviable worth ; / no children; tureens of cracked / china (an aunt's). / Why shouldn't I drift off / like a lost balloon?"

"A Late Writer’s Desk" dwells on a discarded desk, useless now that the writer who used it has passed away: "They couldn’t give it away, I guess, / so left it by the side of the road, / where, obdurate, it warps."  This poem was published in The Walrus, and is still available on-line here.

I found two poems that sort of explored the issue of alternative futures, i.e. what-if scenarios, to be interesting.  The first ("Alternate Histories"*) is almost as compressed as a Edward Gorey story and presumably details a whole range of fatal events that might have been avoided with just one change (just as Partridge must have dearly wished her circumstances to be different): "If they had straightened, not veered, / if they'd caught the night ferry. / If the Consul's clerk had replied, / if west-running tracks had cleared. // If she'd taken the hallway stairs. / If he hadn't missed the warning / while he whistled at tea. / If they'd walked home late from the fair."  It is worth noting that the first and last line of the stanzas rhyme or are near-rhymes.

The If Borderlands collects Partridge's 3 collections and adds a small handful of uncollected poems, which she was able to revise before her death.  There is no question this is the definitive collection of her work, although if I had to pick a single stand-alone collection it would be The Exiles' Gallery, which includes "A Late Writer’s Desk," "Alternate Histories" and ends with "The If Borderlands," which is another mediation on what-ifs.  "The If Borderlands" considers a wider variety of things that might have turned out differently and seems a bit lighter or at least less tragic than "Alternate Histories."  In this imaginary land: "Gifts never shrivel, / no one flails in the whirlpools / of a culture's lies. // We don't lose visas / in cabs; with the loves / of our lives, / we raid the warehouse / of inerrant fortune cookies." 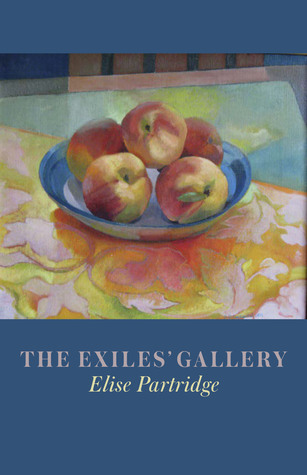 Not all of Partridge's poems speak to me, but those that do are quite powerful.  She wrote about living life fully, even under a death watch, but at the same time acknowledged how much she wanted her life to be different.  She had an eye for the unusual, and, at least in a few poems, demonstrated a sly sense of humor.  I can certainly recommend interested readers check out The Exiles' Gallery and then perhaps push on to The If Borderlands for the rest of her work.


* I have no particular reason to believe that Partridge knew about Constance Urdang, whose final book of poems was called Alternative Lives, though I have no reason to believe she didn't know about her.  In addition to the title poem, the book contains "A Life You Might Say You Might Live;" both seem thematically a bit similar to "Alternate Histories" in the expression of a rage to live, however quietly expressed (to borrow shamelessly from Pope's Epistle to a Lady).  In addition to some of my other ideas, offered up freely, a study comparing Urdang to Partridge seems like a worthy endeavor.  One minor difference that I can see is that Urdang lived for 6 years after Alternative Lives before dying (also of cancer though at 73 not 56).  Also, Urdang and her husband, the poet, Donald Finkel had several children.  So Partridge does appear to get the rawer deal from life when compared to Urdang.