On the whole, many of the poems strike me as Sharon Olds-lite, not that this is necessarily a bad thing.  I am still struggling with my reviews of her [Old's] work where I am torn between acknowledging the needs of artists to write about their experience and the fact that she consistently trampled on the privacy of her children.  Julie Bruck occasionally touches on her children and even her husband once in a while, but making far more innocuous observations and avoiding any soul-searing invasions.  Basically, the difference between taking a photo with one's camera phone in a public space and in a private space, if that makes any sense.

Although the author is from Quebec, she has apparently set up house in San Francisco.  She writes about Chinese New Year there in "Gold Coin."  It is less clear if the sweet old geezers in the book shop in "New, Used & Rare" are in S.F. or indeed the lonely diners in "Islands": "The lunch rush ended hours ago, set-up for dinner / hasn't begun, and the waiters eating at a booth /  in back are only too happy to look away."

"Islands" strikes me as a little like Hopper's "Nighthawks," though she is talking about the loneliness of the afternoon, not evening.  His "Automat" is most likely another evening painting, but not one set in the dead of night. 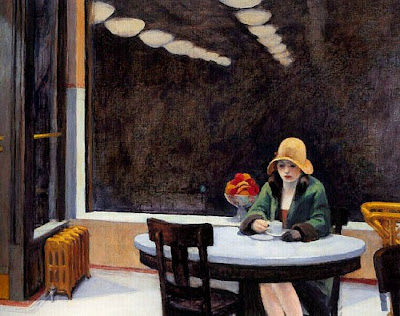 "Live News Feed" does return to Canada, at least by way of a phone call to her father and his girlfriend living in B.C. while the author watches breaking news from Montreal (possibly related to the various student strikes of late).  Her father and the girlfriend don't seem too fazed by the news, even though there is a SWAT team right outside the author's mother's apartment.  The fact that the poem actually dwells more on the girlfriend having taken her father away than the risk to her mother makes me wonder if maybe, on balance, their nonchalance isn't the better approach to news of this sort.

However, the violence really does hit home in "Mutanabbi Street, Baghdad," which focuses on a father who has lost his son in a bombing of a street full of bookstalls that was part of a campaign to decimate the literary and artistic scene of Baghdad.  The poem was part of a broader response by international poets, writers and artists called Al Mutanabbi Street Starts Here, which raised money for Doctors Without Borders.  It is a moving poem that doesn't delve too deeply into the broader politics of the Iraq War and its aftermath.

There is one poem in the collection that really rubbed me the wrong way, and I'll try to explain afterwards:

Deep in the seabed,
when the Twin Towers fell,
two enormous tremors
rocked the eels
of Jamaica Bay, Queens.
A small disturbance
under the great water,
quickly settled.  Now
they lie like circles
of the earth again,
mating and devouring,
dressed in ritual mud.

I have to say, so many things seem "off" about this poem.  While I am not one of those people who say you can't use tragedy, or even this particular tragedy, for artistic purposes, you have to be willing to back up your words and accept that some people will get upset and challenge your right to trade on their suffering.  She doesn't do enough here to justify her use of the Twin Towers in my eyes.  She kind of shies away from really openly saying what she seems to mean.  Does she really mean to say that in the grand scheme of "nature," the disruptions caused by human activity/conflict are trivial?  That the impact on the eels should be taken into consideration and not one word about the people (or other animals) damaged by the impact?

I think she is being particularly disingenuous in referring to Neruda, since she doesn't put her cards on the table and say that she is aligned with the leftists who largely blamed 9/11 on U.S. foreign policy.  Neruda was a great poet, but he basically never retreated from his support of Communism, only his specific support of Stalin.  Neruda most likely would have been horrified by the attacks, but still felt that the U.S. was reaping what it had sowed.  If I had to sum up my feelings about the poem, I would say that it is coming out of an anti-humanist position, which is certainly unpleasant to read but not a completely illegitimate position to hold.  But then almost all her other poems are more upbeat, bubbly and go into the trivial details of her and her family's happiness, i.e. she may or may not be left-leaning but she values the human condition/experience (as do nearly all of us).  So the poem is jarring and inconsistent with the rest of the collection and frankly I do find it diminishes her.  I am a lot less willing to cut her slack (or even read her other collections) because she chose to publish it.  This is the risk one runs when one writes political or politicized poetry.  In truth, I would have had more respect for her if she had actually been bolder, but this just strikes me as trying to have it both ways, implying something but never quite coming out and saying it.  In fact, the title makes it even worse, since she can just displace the whole thing onto some anonymous scientists -- they (not me) are the ones who say...

It's unfortunate that this seems to be the poem that will stick with me the longest, though I did like "Mutanabbi Street, Baghdad" and "Islands."  Sometimes it is the art that sets off a bad reaction that you remember most, though sometimes all you remember in the end that this is a writer you want to avoid in the future.  I don't think I would carry it quite that far, but I do think that it wouldn't take more than another poem or two that annoyed me as much before I decided I really wasn't interested in finding out more about what Ms. Bruck had to say...