To be completely upfront, this is a review of 2/3rds of Beth Powning's The Sea Captain's Wife. You may want to read why I bailed on this book, or you can choose to bail on this review right now.  Your choice.

While I am sure it is completely unfair, as I was reading the novel, I kept feeling that it was Oprah-bait -- a kind of high toned chick lit.  Clearly Oprah promoted quite a few other types of novels, including most memorably Franzen's The Corrections and perhaps most atypically McCarthy's The Road.  I think The Sea Captain's Wife would have been right up Oprah's alley, in that it is intensely about family and the dangers to family and the internal strains on women who are trying to keep family together.  Though the book is a little more complicated than that, and actually this isn't the main issue I have with the book.

Where I have issues is that the set-up is so unbelievably static.  Despite all these hair-raising adventures of the family at sea, the dynamic doesn't change much throughout.  Azuba, the wife, is resentful of being ordered around by Nathaniel, her husband and captain of the Traveller.  He still doesn't fully trust her and considers her presence a huge burden.  They reconcile a bit, particularly over his bonding with the daughter, Carrie.  Azuba starts to see things Nathaniel's way, and he mellows a bit.  She proves her worth and goes up in his esteem, and then things backslide a bit.  Two-steps forward, one step-back in the relationship over and over.  So tedious, even if it might be realistic.  My real objections have yet to arrive on the scene.  But first:

What Powning does well is to paint a believable character in Azuba.  She may be slightly too set on having her own way for a woman in the 1860s (in some ways more liberated than Penelope in MacLennan's Barometer Rising from 50 years down the road) but clearly does feel bound by social constraints even if she chafes under them.

Powning also gets the action underway quite quickly.  She effectively sets up how Azuba always thought that she would have the freedom to sail on her husband's ship and not be a stay-at-home captain's wife.  And that might have been the initial "deal" with Nathaniel, but he later decided that the dangers were too great and she is set up in a really nice house not far from her parents (her father is also in the shipping business).  She starts spending time with a young minister, who is critically not from Saint John, New Brunswick.  They get trapped by the tides in an compromising situation and basically no one, not even her parents, believe it was an innocent mistake.  This enrages Nathaniel when he finally arrives home and he says that Azuba will get her wish to sail with him but it has become a kind of punishment.  "She felt as if he had taken her desire {to travel} like a beloved toy and torn it and thrown it in her lap.  Have it, then, he'd said."

This is one of the most effective passages in the book, but at the same time, Azuba feels so wronged that she really does not see things from others' perspectives.  The whole voyage she is resentful of being put in her place and being ordered around by Nathaniel.  Gradually she at least comes to understand his need to enforce discipline.

Azuba is actually a more complex character than I am making out, but I still didn't care much for her, since she continues to have unrealistic expectations about traveling and being a family at sea.  And indeed, Powning does keep undermining things by having Azuba occasionally think tenderly of the Rev. Simon, who started the whole mess.  In other words, she wants the strong sea captain to have more of the delicacy of Rev. Simon.  And this is where the whole thing keeps threatening to devolve right into chick lit.

I wasn't that convinced by the month stuck in the Doldrums.  I think there would have been far more mutinies than just the two Powning outlines.  Maybe revising this downwards to two weeks would have been more believable.  I'm sure it wasn't what was on the author's mind, but I kept thinking about the Waiting Place from Dr. Seuss's Oh, the Places You'll Go! 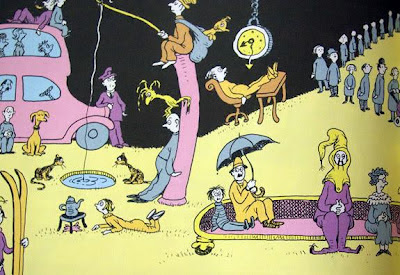 Anyway, they do escape the Doldrums and just manage to get new provisions at the Isle of Wight before the crew all starve to death.  (On top of everything else, they were cheated out of several barrels of beef and other foodstuffs by an unscrupulous agent.  While I wouldn't put it past Powning to have Nathaniel and crew find this agent and give him "rough justice," it seems unlikely their paths would cross again.)

Azuba makes it to Antwerp just in time to give birth to a son, who doesn't seem too damaged by the whole ordeal.  And this is where we think a huge decision must be made.  Will Azuba ever travel with Nathaniel again?  Will she decide it just isn't safe for her children and send them home to her parents as other captains' wives have done?  (Quite frankly, Azuba seems to keep running into a lot of women on these ships when it was still a statistical rarity.) Will she agree to travel back to Canada or insist on all of them going one one last trip on the Traveller? As it happens, we do know from the map in the front of the book that the Traveller only makes it from Antwerp to Hong Kong and not back to Saint John.  So that signifies some important plot twists and turns.

One would think that would be plenty, but then Powning pulls a stunt that I found truly outrageous.  As Azuba is recovering from the birth and out strolling a bit and sight-seeing in Antwerp, she runs into the former Rev. Simon.  It isn't that surprising that he was removed from his local ministry, but he apparently left the Church altogether and now wants to be an artist.  He went to Paris to learn photography but was visiting Antwerp.  As one might imagine, Nathaniel is flabbergasted and outraged.  As am I as a reader.  What are the odds of this happening?  One million to one?  Ten million to one?  You have to recall, the American Civil War is still on, and Saint John is still close enough to Maine that I imagine ship traffic was significantly curtailed.  It just seems pleasure cruises across the Atlantic for people who just happen to want to be artists might not be the wisest or safest of choices at that time.  Simon says that he thought they had all been lost at sea (and thus he wasn't actually following Azuba).  Now it is certainly possible that Powning is setting him up to be a monstrous liar, and thus driving Azuba into Nathaniel's arms once and for all.  I personally would find that an even bigger plot cheat -- completely inconsistent with what the reader had been told about him in the opening chapters.  In any case, I just find this situation (being confronted by the two men she has feelings for) so trite and cliched --.  Let me start again. More precisely, the lengths Powning goes to to set up this conflict in a way that is not at all believable to me makes it mere chick lit and not worthy of true literature and certainly not worthy of my time.  I actually started hating the book at that precise moment and will not read another word of it.  So alas, for me, poor misunderstood Azuba, strong but suspicious Nathaniel, and senstitive but possibly sneaky Simon will remain forever in their unresolved triangle.  I'll just never know how it all ends.


(Ok, if it turns out that Azuba ends up running an opium den in Hong Kong, go ahead and tell me in the comments, and I will read the rest of the book just for that.  But for anything less, I'm truly out.)