The Progress of Love is Alice Munro's 6th collection of short stories (out of 14 if you don't count selected stories and other recombinations of the original collections).  I'm not quite at the halfway mark, but getting quite close.  Taking this collection as a whole, I found its tone to be generally angrier and closer to Who Do You Think You Are? than The Moons of Jupiter -- the collection sandwiched between these two -- which was a bit more expansive in seeing several sides to each relationship.  That said, it isn't always wives angry at husbands (or vice versa) but there are daughters quite angry at mothers and vice versa. 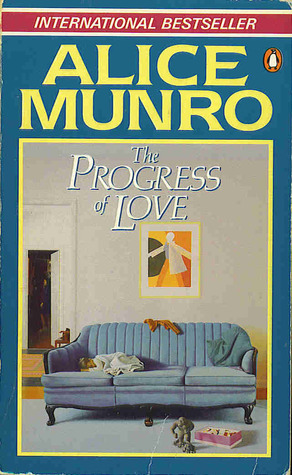 I definitely preferred The Moons of Jupiter to this collection, and in fact, there really aren't that many stories that stood out (for me) in The Progress of Love.  Munro still does a lot of telescoping of time, so for instance in "Miles City, Montana," a story that basically operates in two time periods -- the time of the road trip and an earlier time when this couple was just starting out and spending time with their respective families -- Munro throws in a paragraph noting that the couple has broken up and has completely lost touch.  It is almost the entirely casual way that Munro indicates, well of course they broke up -- virtually all couples in Munroland are incompatible and split up.

Anyway, anger seethes through most of these stories.  In the title story, a woman has never forgiven her father for remarrying and moving out west.  She burns up her inheritance money, even though it could have done quite a bit of good for her children.

"Lichen" also seems a blast from the past where the story features a serial philanderer who basically is getting ready to dump his second partner but wants forgiveness of a sort from his first wife.  There wasn't much insight into his character other than he was a greedy, needy individual.

Munro does turn the tables a bit in "White Dump," where she introduces a woman who ends up having several love affairs.  She tells her (grown) daughter that she finds the beginning of a love affair is (naturally) the best "when it flashes on you what's possible" and before it gets sordid.  It is somewhat interesting that Munro seems to be linking infidelity to the American (here including Canada as part of North America) penchant for self-reinvention and self-realization.

Munro tries to understand the younger crowd in "Circle of Prayer," where a nursing home attendant is quite upset at her teen-aged daughter.  Ostensibly this is because the daughter has taken a valuable necklace and put it in the coffin of a classmate, who had died in a car accident.  But it is more likely just the inability of mothers and teen-aged daughters to communicate, and how this friction lasts until the daughters reach their 20s (and sometimes beyond).

I found the attempted escape from small town Ontario (Gallagher) to Toronto to be amusing.  This is related in "The Moon in the Orange Street Skating Rink."  This story is particularly telescoped, where Munro writes about the three main characters as teenagers and then as retirees.  The middle bits, i.e. the main part of their lives, are almost entirely skipped over.

Finally, "A Queer Streak" is an interesting two-part story, where the first part details how a young woman is forced to give up her career due to having to come home to take care of her family.  It is particularly hard to take when Violet's engagement is also broken off because her finance, who is in training to be a minister, says that his chances of getting on in the church will be thwarted because of her sister's "queer streak."  He is clearly a sanctimonious prig, but it still seems that her chances of happiness have been destroyed because of her sister.

The second half is a bit easier to take.  Violet eventually is freed up from dealing with her family.  Both her sisters grow up and seem to be fairly normal.  When her mother dies, she can sell the farm and move into town.  Violet becomes an manager at Bell Telephone during WWII (when men were scarce) and, despite hints, doesn't give up her job after the men start returning from the front.  She keeps in touch with her nephew, Dane, who is homosexual.  This may be the first homosexual character Munro has introduced.  This apparently doesn't phase Violet, and, aside from a bit of discomfort, Wyck her "gentleman caller" also takes it in stride.  Munro then jumps a few decades ahead, indicating that Violet was finally able to marry Wyck after his wife passed on, but then eventually Wyck dies (during the Grey Cup no less!).  I'd say that Munro is basically showing that life is long and there are many twists and turns.  While Violet was certainly thwarted early in life, she ended up reasonably content.  The second part of the story is vaguely reminiscent of Barbara Pym, though I'm trying to recall whether Pym ever allows an "adulterer" to come to a happy end, as happens in "A Queer Streak."  In terms of the shifting perspectives on life, Tremblay's Albertine in Five Times is really quite good, though he has Albertine zig-zagging between extreme highs and lows in each decade of her life (and Albertine herself may have some mental illness), while Munro is describing a more graduated movement between low and high points.  Taken as a whole, this story is probably the best of the bunch.