This will be a realatively short review of The Prescription Errors by Charles Demers.  I stumbled across this book entirely randomly at Robarts (while pondering why someone had removed almost the entire shelf of George F. Walker's plays) and decided that it was worth reading a short novel set in Vancouver.  Demers is a bit of a notable figure around Vancouver, an activist and comedian (an unlikely pairing to be sure).  He is also the author of Vancouver Special, a book of non-fiction essays on Vancouver, written from a progressive perspective.  I remember hearing about this book, but I haven't read it.  Perhaps I will tackle it next year. 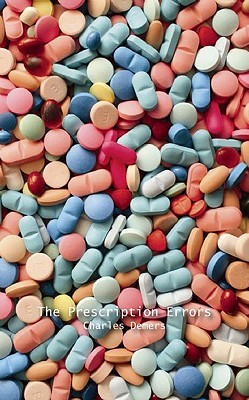 It is worth noting that while the majority of The Prescription Errors is focused on Daniel, a left-wing underemployed man inflicted with OCD, there are recurring chapters about a stand-up comic, Ty, who is filling in for fellow Canadian voice artist, Al Sampson, on a cartoon show vaguely modelled on The Simpsons.  While I understood how Demers wanted the two strands to come together (and perhaps he wanted to use what he knew about the local comedy scene), I thought it was kind of distracting and unnecessary.

Anyway, the main story is about Daniel and his compulsion to read about medical technology (that might help him cure his OCD).  The weird thing is that several people sort of keep trying to intervene in his life, but it isn't until he starts seeing real suffering (his landlord is undergoing painful medical interventions to be a bone marrow donor to his estranged brother and his cousin's partner is on the verge of a breakdown when her children's book is being censored) that he is able to gain some insights into his condition and get some relief.  It does seem surprising that he could be "fixed" this easily.  As it happens, this is a largely autobiographical novels, and Demers has continued to write about his particular compulsions in his latest book of essays, The Horrors (see interview here), where he explains he didn't do the hand-washing or the counting, but just lived with overwhelming feelings of guilt (that he would hurt someone or was going to become a pedophile).

In any event, during the course of the novel at least, his attention is fixed outward on his cousin, Sara, her partner, Nicole, and their son Robeson.  Nicole has written a children's book on lesbian turtles, and there is a parents group (led by a pastor) in Surrey who want this book to be banned from the school library system.  This is causing quite a bit of stress.  One of the details of The Prescription Errors, which is presumably fictional but feels accurate, is that there is a gay/lesbian bookstore in Vancouver that is organizing a counter-protest, but 1) they take forever to gear up and 2) they have their rally in Vancouver rather than Surrey!

There are quite a few details that Demers manages to squeeze in about the contradictions of living in Vancouver (I assume he fits in even more in Vancouver Special).  You have the aging hippie landlords, the rising inequality in the city, dealing with the SkyTrain and the bus, the cheap pizza places downtown (in fact there is an interesting discussion of these in the book around whether the majority of these places are just fronts to launder drug money, since they couldn't actually be making a profit), the easy access to marijuana, etc.  So this book may be of interest to anyone who lived in Vancouver since roughly 2000.  The book was written slightly too early to cover the impact of the Olympic Games or the current mayor's fascination with adding bike lanes.

Maybe the most notable aspect of the novel is that it starts off feeling fairly angry (or at least angst-y), but it has a much gentler and forgiving ending than I was expecting.  Maybe this is just a temporary lull (before OCD compulsions kick in again) or a momentary state of grace where Daniel feels nobler and more connected to others, but it was a bit of a relief for me that the book didn't end with some huge tragic event (or at least for Daniel and his extended family).
Posted by Eric P at 5:28 AM