Natasha and Other Stories by David Bezmozgis is a relatively short book of stories.  It is similar to Munro's Lives of Girls and Women in that it is essentially a novel told in short story form, here focusing on Mark Berman and his family. 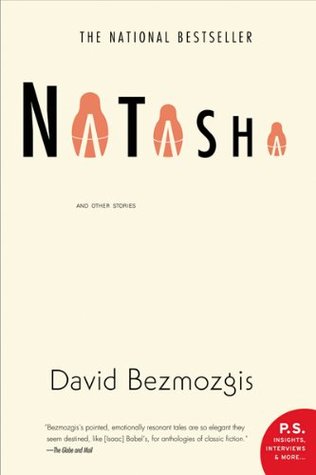 In the first story "Tapka," Mark and his slightly older cousin, Jana, are quite young children.  They are adjusting to life in Canada, as their family of Russian Jews, has settled in Toronto in 1980, after a short transition period in Rome.  Incidentally, Bezmozgis has written a novel (The Free World) based on another Russian Jewish family, stuck in Rome, trying to decide whether to immigrate to Israel (with an easy path to immigration) but still holding out hope for the United States, with Canada seen as an acceptable alternative.  Mark's family spends some time with another Russian couple in their apartment, though Mark's mother disapproves of how much attention the other couple lavishes on their dog, Tapka.  The dog ultimately drives a wedge between the families, though it is likely that class considerations would have had the same effect over time, since Mark's parents are more driven to learn English and assimilate into Canadian life and would have left the other couple behind eventually.

In fact, in virtually every story, we find that Mark's family has moved, first into another apartment a few blocks away from the rest of the Russian Jews (paying an extra $10 for that privilege).  Then to a bigger apartment.  And eventually to a house in the suburbs (I assume this was probably North York, though it could have been the northern portion of Etobicoke).  In addition to his factory job, Mark's father has his own business as a massage therapist (he actually used to train weight-lifters in the U.S.S.R.).  The business is very slow to take off, as noted in "Roman Berman, Massage Therapist" and they are still struggling in "The Second Strongest Man."  I particularly liked the opening of that story: "In the winter of 1984, as my mother was recovering from a nervous breakdown and my father's business hovered precipitously between failure and near failure, the international weightlifting championships were held at the Toronto Convention Centre."

Eventually they reach a level of economic security by the time they buy this house (at the start of the story "Natasha").  As a complete aside, the housing prices in Toronto and the GTHA in general are now so high that immigrants that move here with just some moxy (but no cash reserves from the old country) are not likely to be able to eventually buy their way into the Canadian dream, like the Bermans did.  It's not necessarily the end of the world to be bound to the rental market, but it probably does feel like these newer immigrant families are kind of stuck in place in a way that is distinctly different from what immigrants faced prior to the late 1990s.  Of course, there are immigrants coming to Canada today with loads of cash, largely but not exclusively from Hong Kong and China; that is a very different story (one that hopefully will be explored in literature at some point).

The odd thing is that while each story has a somewhat downbeat feel to it (we see Mark humiliated on his father's behalf a couple of times and he suffers in other ways), as the stories progress, the family becomes more and more comfortable.  It seems that the move to Canada has definitely paid off, particularly when former friends from the U.S.S.R. turn up for a weight-lifting competition in "The Second Strongest Man."  As one of the judges, Mark's father gets to relive his glory days, but the focus of the story really is on one of the weight-lifters who is nearing the end of his career and will be put out to pasture back in the U.S.S.R.  The weight-lifter and all his minders are all more than a little jealous that the Bermans escaped, almost entirely because of their Jewish roots, so there is also quite a bit of tension in this story.

Mark's father is still alive through "Natasha," but a very shadowy character.  I am not sure whether the fact Mark is reading Kafka's Diaries is supposed to be a tip-off that he has suffered a kind of break with his father.  Unless I have completely missed it, the father doesn't turn up at all in the final two stories, even in passing, although Mark's mother and aunt do.  It is possible that he has passed away or it might be that Bezmozgis doesn't want to confuse the tone of the story by having to downplay the (presumable) success of the father.  Another thing that I found a bit confusing is that in "An Animal to the Memory," Mark's grandfather says he will go to Israel rather than Canada, but in the final two stories "Choynski" and "Minyan" Mark has grandparents living in Canada.  I'm fairly sure it is his paternal grandfather in the first case and his maternal grandparents in the second (and this partially explains why his father fades out of the picture), but it might have been better to be a bit more clear about it.

There is quite a gap between "Natasha" and "Choynski."  It is implied that Mark went to university (likely on some kind of a scholarship unless his parents' fortunes had really improved) and he is able to hold down solid jobs, though he is between jobs in "Minyan."  He is able to buy plane tickets to research obscure sports figures and make long-distance calls (back when they were still on the expensive side), so he has definitely moved up on the economic ladder; in that sense, moving to Canada definitely paid off for the Bermans.  While Mark was definitely starting to run a little wild in "An Animal to the Memory" where he became the toughest kid in Hebrew school (not exactly a compliment) and was smoking a lot of weed in "Natasha," he seems to have straightened out and become a mensch in "Choynski" and he actually enjoys spending time with his grandparents.  While I think a story about Mark in university or in his first job after university probably would have helped round out the collection, it is possible that Bezgozmis prefers that Mark's transformation (the one he vows to undertake at the end of "Natasha") is better kept off-screen, much like Jay Gatsby's.

"Natasha" is quite a remarkable story -- definitely my favorite from the collection.  Note that it does have a certain prurient aspect to it.  Maybe this is the equivalent of "Portnoy's Complaint" for Russian Canadian Jews...  Mark is lazing away at home for the summer.  He is starting to get flak from his parents, since he can't tell them he is actually running errands for the local dope dealer, Rufus, who is also a philosophy major at U of T.  His uncle has just married a Russian woman, who arrives with her 14 year-old daughter, Natasha, in tow.  It is decided that Mark will keep Natasha company (and out of the newlyweds' hair) by teaching her English.  It doesn't take long before Natasha lets Mark know she hates her mother, whom she considers a whore.  Natasha has quite a bit of sexual experience already, having been in a number of pornographic videos shot in Russia.  It doesn't take long for her and Mark to get busy, but she quickly realizes that he isn't going to be able to "rescue" her from her family, so she seduces a number of other men.  This reminded me a lot of the movie Bowfinger where one character starts by sleeping with the writer(!) and progresses through pretty much all the other men on set.  Mark had sort of considered himself wise and jaded before, but this episode really opened his eyes to life.  As I said, it is a fairly remarkable story.  The collection as a whole is worth reading, but "Natasha" is a must-read.
Posted by Eric P at 11:55 AM