I wasn't entirely sure I was going to review Dany Laferrière's Heading South, since it has almost nothing to do at all with Canada.  All the stories and vignettes are set in Port-au-Prince, the capital of Haiti.  Even the tourists that occasionally turn up are from the United States or England or France.  However, there was something that was nagging at me, and it broke out in the story "A Small House on the Side of the Blue Mountain."  This combined with a similar annoyance with the play Disgraced, and I decided I would do a hybrid review of both.  It's also a bit of an attempt to get a lot of negativity out of my system, so it won't continue to fester.  (By the way, I don't think Heading South can be SPOILED, but Ayad Akhtar's Disgraced can be SPOILED, so don't read on if you hate SPOILERS.)

Going back to my review of How to Make Love to a Negro, I think the bottom line was I was largely bored with the book but I didn't actively dislike it.  I actively disliked Heading South.  It was truly a sordid piece of work.  Basically all interactions between people are rooted in sex, in Laferrière's vision, either directly or at most one step removed ("friends" hang out with each other because one young man can pull the ladies like crazy makes sure to give his friend sloppy seconds after he is done with the women and has discarded them).

In many ways, this book comes across as the literary equivalent of revenge porn.  Quite a few books and movies have covered sex tourism in the Caribbean (perhaps the most memorable is How Stella Got Her Groove Back) but in a fairly shallow way.  While still shallow in my view, Heading South flips the script and makes it clear that the Haitians are actually in control of these sexual dalliances with Americans or Europeans.  Those stories make up about 40-50% of the little vignettes.  In the other ones, it is class that plays the same role, with the upper class women falling madly in heat (not in love) with their sexual partners from the lower classes.  It is so absurdly reductive, and the book is really not particularly well written.

In one of the more reflective passages in the story "Skin," one of the women talks about how everyone seems to end up sleeping with everyone else, aka it is just a big circle.  (And if that wasn't enough one of the ritzier clubs is named the Bellevue Circle but always just referred to as "The Circle.")  But unlike the effect in Ophüls's La Ronde, which is probably what Laferrière was going for, we are not presented with a clever set of circumstances linking society.  It is just a claustophobic feeling with everybody entangled in everybody else's business.  One would never sense that Port-au-Prince has nearly 1 million people, since it is always the same 20 or so people that end up coupling with each other in various combinations, as one would find in a small village.  (I have a similar bone to pick with Mahfouz's The Cairo Trilogy, though it is only a minor complaint lodged against a much richer and rewarding work than Heading South.)

I can certainly understand and perhaps even respect a character who feels that everything gets reduced to sex in the end (not that I agree everyone is actually so driven).  However, the author keeps egging the pudding and he is clearly indicating that yes, it is a fact that every character in this book (and by extension the world) is completely driven by sex.  In particular all women will drop their drawers when romanced in just the right way.  Or really barely any encouragement at all.  I still am shaking my head at "A Small House on the Side of the Blue Mountain" where this woman visits Haiti with her husband, meets some old farmer and immediately decides to abandon her husband (and children) and become the farmer's common law wife.  I just thought the whole worldview was so absurd and one-sided, and it angered me that he (Laferrière) was trying to rope me into his sordid view of life.  I guarantee you that this is the last book of his that I will read.

I wasn't quite as upset by Ayad Akhtar's Disgraced, but it pulls a similar move at the end.  It takes a while to get there, and we spend a fair bit of time watching this self-hating Muslim apostate lawyer and his ultra liberal artist wife interact.  It's quite odd, since she is starting to appropriate Islamic art into her own work and is bending herself into knots to not be racist.  Eventually she says silly things like "We could learn a lot about submission from studying Islamic art" (or was it discipline) and she takes a very charitable interpretation of the Quran, which upsets her husband since he has thoroughly disavowed his culture.

Up to this point, there are actually quite a few parallels with Jewish writers, particularly Philip Roth, who showed their culture warts and all, and obviously upset a lot of fellow Jews, including his own family members.  Akhtar talks explicitly about this connection in an interview covering Disgraced, including the suspicion that some people have that he gets produced so much because he dwells on negative aspects of Islam.  It must be said that I liked the interview considerably more than the play itself.  It's not particularly hard to find reviewers who hate the play on these grounds, but I won't bother linking to them.

As a side note, it appears that each production comes up with its own artwork, representing the wife's work.  While this piece from the Goodman production is certainly inspired by Islamic art, it is so incredibly insipid that I cannot believe a reputable art critic would be interested in it, even if it was a ploy to get into the artist's pants. 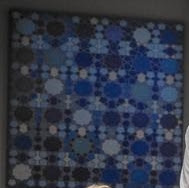 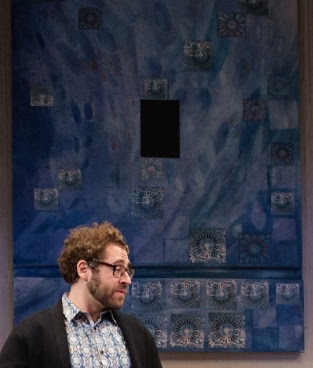 The second piece is the one in the Mirvish production that I saw a few weeks back in Toronto.  It matches the description in the play a bit better (there is some discussion of negative space) but it doesn't leap out and say it is inspired by Islamic art.  However, I could at least believe an art critic might at least give it a second glance.  In this sense, the producers have a much harder task than when they are putting on Red (which ends with a canvas primed with solid red paint) or Art (where they just need a blank white canvas).

There are two major turning points in the play, both of which are supposed to be quite disturbing.  One of which I could buy is when the lawyer beats his wife after he finds out about the affair.  I have to admit, I thought she was so brainwashed into accepting Islam and "submission" that she would accept this as a just punishment.  However, the abuse seems to snap her out of her fog and she realizes that cultural relativism can be taken too far, and that cozying up to Islam isn't just a game.  I grudgingly thought this was pretty well expressed.

What I basically didn't buy is that as the lawyer gets drunker at a dinner party, he keeps arguing about how people are really just tribal and how they will always revert to their own people when chips are down.  The art critic demurs, and eventually the lawyer says that he felt a flash of pride when 9/11 happened.  This sets off quite a few arguments, and basically everyone does get down and dirty and quite tribal.  Some spitting is involved.  So again, the author is putting out this theorem that cannot be denied within the play itself that everyone will revert to their ethnic tribe.  I resent this kind of manipulation.  A better approach would be to show that people are more varied and that some people cannot be reduced down with such a simplistic formula.  I also had a lot of trouble believing that someone who had spent his whole life rejecting Islam would suddenly be proud of the 9/11 hijackers.  It just doesn't compute in any meaningful way for me.  (I mean it wasn't hard to buy that the nephew would be secretly proud, as he was well on his way to radicalization anyway.)  So given all this, it isn't hard to understand why a fair number of Muslims hate this play (and it is playing everywhere, so it is pretty hard to avoid).

I probably won't actually get around to watching them, but it does sound as though I would like Akhtar's The Invisible Hand slightly more and perhaps The Who and the What a bit more than either of those.
Posted by Eric P at 1:02 AM