10th Canadian Challenge - 34th Review - Not Wanted on the Voyage

I remember talking about Timothy Findley's Not Wanted on the Voyage with a Canadian friend, and she said that it had been assigned reading in her high school.  Now I didn't probe and check whether it was the standard assigned text or just been on a long list of alternative readings.  Nonetheless, I thought that was somewhat shocking and fairly daring to promote this to high schoolers (and something that would not happen in the U.S., as the book is extremely critical of organized religion and is fairly preoccupied with feminist theory).  After all, there are still occasional protests by parents in Ontario saying that the sex ed curriculum goes too far and is too accepting of homosexuality and transgender identification.  Also, there is a fairly graphic molestation scene in the book that would definitely qualify as statutory rape.  It is certainly not presented as a positive, but its inclusion in the book is troubling nonetheless. 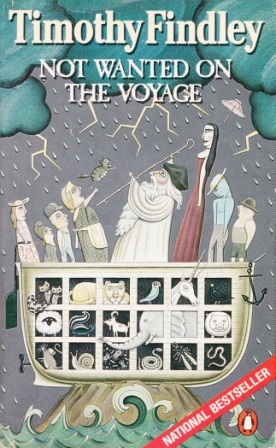 Before I get too deep into this review, I should note that Findley's novel was actually turned into a musical by the team of Neil Bartram and Brian Hill.  It had a special development at Northwestern University in 2010 (some info here) and then a couple of years later it was at the Goodspeed Musicals' 2012 New Works Festival, but it completely vanished after that.  I think that's a shame.  I thought it was an amazing musical (I saw it at Northwestern), but I can see it having trouble reaching a mass audience, precisely because it is so thoroughly inverts and subverts the story of Noah and the Flood.  I think it could probably succeed in a handful of liberal cities, but probably not on Broadway, given current Broadway economics.  While I don't really expect it to ever turn up again, I would certainly go if the opportunity arose.

It is pretty difficult to SPOIL the story of the Flood, as it is fairly well known.  However, Findley definitely alters or reinterprets the events related in the Bible and he adds quite a few characters not mentioned in Genesis.  I'm going to jump around and cover events from the middle and end of the novel, so a SPOILER warning is probably appropriate after all.

The reader learns fairly early on that there is trouble at the Noyes household.  Japeth, the middle son, is moody because his child bride, Emma, won't have marital relations with him (this is an on-going issue/conflict even after the Ark is launched).  His skin has also been stained blue permanently, though this is not the root cause of Emma's refusal.  Mrs. Noyes is much put upon, though she manages to get through her days in a bit of an alcoholic daze (though this does come to an end after the Ark is launched).  She also lavishes attention upon her elderly half-blind cat, Mottyl (who is effectively the narrator for long stretches of the book).  Noah, and indeed Yaweh when he makes a personal appearance, is portrayed as a petulant, fairly tyrannous patriarch.  And perhaps here Findley does not actually depart that much from the text...

Anyway, Yaweh is impressed by a two-bit conjuring trick where Noah makes a penny in a bottle disappear by covering it with water, which is where Yaweh gets inspiration for the Flood.  What's a little off is that Yaweh insists that his two ancient cats accompany Noah on the Ark (it is strongly suggested that Yaweh decides to die -- and not resurrect himself -- after he sets the Flood in motion), but if the very pregnant Mottyl hadn't been snuck aboard the Ark, then cats would have died out as a species.  (As a total aside, it boggles my mind that there are still people who believe every word of the Bible is literal truth. I have no idea how they square the fact that people could only have emerged from incest over and over and over again (how many sisters did Cain have anyway?), to say nothing of the inbreeding that would have eventually killed off all the animals on the Ark.*)

One other major twist Findley adds is that Lucifer disguises himself as a 7-foot tall woman (named Lucy!) and marries Ham, the youngest son, so that he can escape the Flood.  Findley doesn't seem to be following the path laid down by Milton, i.e. Lucifer is in charge of Hell and only visits Earth from time to time.  In this version, after his rebellion, he landed on Earth for good.  His powers are much more limited, and he isn't Evil incarnate, just someone who instinctively sides with the underdog and rebels against authority.  (Actually, Lucifer seems pretty similar to Satan in the Book of Job.)

Perhaps not surprisingly, Mrs. Noyes, Lucy, Ham and Emma all rebel in one way or another from Noah's authority and end up locked up below decks.  Most of the novel is told from the perspective of people or animals low on the totem poll and oppressed in one way or another.  This is probably the most significant way that Findley's departs from Genesis.  The first rebellion fails, but a second rebellion partly succeeds, though ultimately it leads to an uneasy detente between the various factions.  By this point, the rain has stopped falling, but land has not been discovered, even though a number of doves have been set off to look for land.  Mrs. Noyes realizes that she doesn't think she can take another 100+ years of being oppressed by Noah.  The novel ends with her praying for rain.  I had forgotten just how downbeat the ending actually is.

I've compressed a lot, but I wanted to focus on the main themes of the novel.  This is definitely not a novel for anyone who wants to avoid an outright attack on Christianity specifically and patriarchy more generally.  But it is a very imaginative retelling of the Flood story with a number of memorable characters, particularly Mottyl, and I do recommend it to readers who like being challenged in their assumptions (or just those that want to give Biblical patriarchs a good kicking).

* Findley actually pokes a bit of fun at those who have no understanding of genetics by indicating that Noah carries a recessive gene that sometimes results in his offspring being born as apes or chimpanzees, sort of a reverse evolution, though Noah practices social Darwinism by killing off these offspring so they have no chance to reproduce.