First off, a note about covers.  The original paperback cover of Marian Engel's Bear is a fascinating mishmash of soft porn stylings and the note that not only was Bear a Canadian best-seller, but the novel won the Governor General's Award.  This incongruity still puzzles people, and over the last few months has led to a bunch of Canada WTF! posts.  I should note that I was planning on rereading and reviewing Bear anyway, but it does seem particularly timely.  I did move up my review timeline to pair Bear with The Golden Ass, as they share bestiality as a common theme.

Anyway, a novel that wins the Governor General's Award almost by default needs to be included in the New Canadian Library, though with a much tamer cover with a pair of hands holding a carved bear. 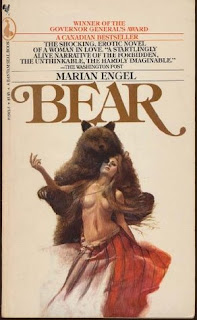 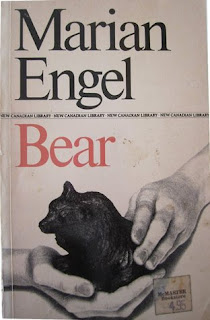 Even this allusion to sex with bear was apparently too much, so the next cover replaced this with an invocation to wilderness by presumably one of the Group of Seven artists.  But the next cover design seemed to think even that was a step too far, since it hearkened back to where the woman met the bear, so we just have a lamp on this fairly austere cover (to create a book one would totally not be ashamed to read on the subway...). 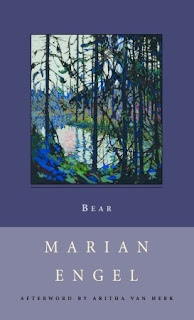 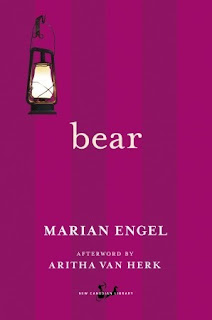 Interestingly, the most recent (2014) edition is from Emblem (itself a branch of Penguin/Random House) rather than the New Canadian Library imprint.  It basically looks like one of Degas's women coming out of the bath but with the raw scars from where the bear mauled her after one of their romps got a bit out of hand.  This cover also features a quote from Margaret Atwood pasted where a tramp stamp would naturally go.  Enough said perhaps. 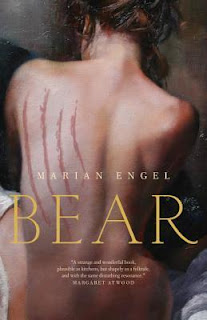 And now for the meat of the review.

Only a few pages in, I encountered a ten-dollar word I had never come across even once: meridional.  This means "located in the south or southern," and in context it means that Colonel Cary's wife would stay south (in Toronto!) while he headed north to Cary Island.  Cary Island appears to be a real place in Indian Lake, about halfway between Kingston and Smith Falls.  It does look pretty remote.  I have no idea whether any of the other aspects of its history (that it was settled, if you can call it that, by an eccentric former British colonel, who built a house in the shape of an octagon and filled it with a library of late Victorian novels and philosophical tracts) relayed in Bear are true.

Bear starts out very much like a fable.  The main character, Lou, is an archivist who spends most of her time in the basement of the Historical Institute.  I'm not sure that Steve Zipp was riffing off this archivist when he had his female biologist character forced into an underground office in Yellowknife, but it is at least possible.  Anyway, within a few pages, Lou is told that the Institute has prevailed in court, so they now own Cary Island, and she will be sent off to the Island to see what, if anything, is of historic interest.  She drives there in a couple of days, meets the local storekeeper, Homer, and settles in at the octagon house.  Almost in passing, Homer tells her there is a bear that is part of the estate.

As she delves into the library, she keeps coming across notes about bears that have been left in the books in the library.  The library itself is a solid one, but has no meaningful connection to Canada, and she realizes that she could catalogue it in a few weeks.  However, she slows down her pace and keeps fobbing off the threats of the director to come visit and she how she is doing.  In the end, she takes pretty much the entire summer to get through her task.  And as pretty much everyone already knows, she engages in some very kinky sex with the bear.  She invests in him the qualities that she finds lacking in real men she has slept with, including her director and eventually Homer.  At one level, she realizes that she will not actually find satisfaction from a bear or that she can actually love him as a true companion, but she does forget this at times.  (In some ways, this novel should have been titled Looking for Mr. Goodbear.)

Anyway, towards the end of the novel, it seems she will actually arouse the bear, and they'll take things to the next level, but then he casually swipes his claws across her back and the moment is over.  She basically comes to her senses and examines her life (which could have easily come to an end at that moment): "He ripped me, she thought. That's what I was after, wasn't it, decadent little city tart? ... Slowly, she turned and looked over her shoulder in the pier-glass at her back: one long, red, congealing weal marked her from shoulder to buttock.  I shall keep that, she thought.  And it is not the mark of Cain."

She wraps up her work, and the bear is taken back into the care of the Native family who looked after the estate in the winter.  Lou seems transformed by experience (as one is at the end of a fable) and announces she will quit her job and do something different.  Presumably she means something where she isn't hiding from the world, but it isn't entirely clear.  All in all, a very strange tale.  It does seem to share at least some elements of Atwood's The Edible Woman, or perhaps something that Angela Carter might have written.  Still, for better and worse, I can say that it is unique in all of Canadian literature.
Posted by Eric P at 10:47 AM